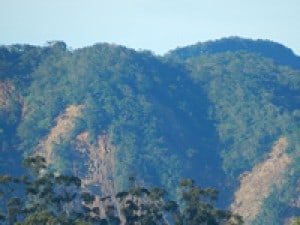 [/one_third]ERuDeF with technical support from the Ministry of Forestry and Wildlife (MINFOF) has started the process that will lead to the creation of four community forests in Upper Bayang Subdivision, Manyu Division in the Southwest Region. A feasibility study and a sensitization trip have already been made to Upper Bayang by ERuDeF staff and those of MINFOF to ascertain the level of degradation of the forests and the preparedness of the people.

All the nine villages to be involved in the community forestry project were visited. At Ebangabi, the secretary of the traditional council, Pr. Tambe John Ashu, on behalf of the Chief, promised that they would do all in their power to make the process smooth.

In the same spirit, the Youth President of Chinda, Eli Benedict, promised to mobilize the entire village whenever need arises.

The Youth President assured ERuDeF of the commitment of the youths of his village.

The oldest man in Ayukaba village, Tabe Paul Tambe, said a community forest will be a dream come true. He added that their forests are extremely rich in plant and animal species including gorillas, chimpanzees, monkeys and other large mammals.

According to Chief Tarh Frankline of Egbemo, his community had longed for a community forest but did not know how to go about it.

Chief Tarh said the last ‘vente de coupe’ that was hosted by his community did not do much in terms of development.

“They [timber companies that exploited 11.05.24 and 11.04.01 vente de coupes] exploited our forests but we have nothing to show for, so we prefer to manage our forest resources ourselves,’’ Tarh said.

Manyu Division is host to six forest management units for industrial timber exploitation. It covers a total surface area of 263,537 hectares, a national park, sections of two wildlife sanctuaries and a forest production reserve with surface area of about 130,006 hectares and just one community forest of 4000 hectares.

It also hosts two mining concessions covering a surface area of about 180,000 hectares. Thus, communities in the Division have limited rights to their natural resources and the creation of additional community forests will be an advantage to the surrounding communities.

It should be noted that this is a continuation of the work that ERuDeF and the Regional Delegation of Forestry and Wildlife started in 2012 following a decree signed by the Government of Cameroon advertising three forest blocks 11.04.05, 11.04.06 (Ayukaba, Bakumba Chinda and Ebangbi) and 11.04.07 (Egbemo, Etoko, Bokwa, Kendem and Numba) for the sale of standing volume (vente de coupe).

Vente de coupes are large volumes of standing forest advertised by the government for sale to private individuals or timber companies for exploitation. These companies pay taxes to the government from which certain percentages are given to the councils concerned for the development of their areas.

The villages directly concerned do not really benefit from these taxes; these exploiting companies do not employ the locals, among others. On the other hand, the creation of community forests will empower the villages to sustainably manage their natural resources as it fosters the sense of ownership.

According to the Divisional Delegate of Forestry and Wildlife for Manyu, Kouamedjo Thomas, community forestry is a laudable initiative because it ensures sustainable management of forest resources, while generating revenue for adjacent communities.

He, therefore, pledged his full support to the process.

The team that went to the field included the Project Manager, Ms Limbi Blessing Tata, Assongacap Floribert, the Community Forest Assistant and Tchobe Leon, Chief of Forestry and Wildlife Post of Numba.

The project is financially and technically supported by the New England Biolabs Foundation, the Waterloo Foundation, Global Forest Watch, and the African Conservation Foundation.