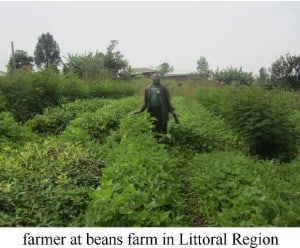 Farmers in the Littoral Region of Cameroon have expressed deep satisfaction and appreciation with the agro-forestry system of agricultural production initiated by Trees for the future Cameroon as a way of boosting their farm productivity.

Some farmers in the Littoral Region however resisted this approach under the pretext that a farming practice like life fencing for example was going to reduce farming space. They have however been proven wrong by the same farming practice.

“At first we were skeptical because, we thought these life fences were going to reduce the spaces meant for our crops. But after trying the establishment of these fences notably with trees like Acacia, Luceana, and Calliandra, we realized a visible increase in our farm productivity as compared to previous years” admits Mr. Youmsi Justin, a farmer in The Littoral Region, Cameroon.

Mr. Younsi added that since they finally adopted the agroforestry system of farming, there have been improvements in soil fertility.

“We now have natural fertilizers from these trees and even use them as wind breaks besides the other advantages like wood, stakes for climbing crops and seeds for sale. “ he testified.

Given the current rate of global warming, land over exploitation and soil erosion, the ideal approach in boosting agriculture especially in sub Saharan Africa lies in the adoption of modern farming practices that conserve biomass like the planting of environmentally friendly trees (acacia, luceana, calliandra)