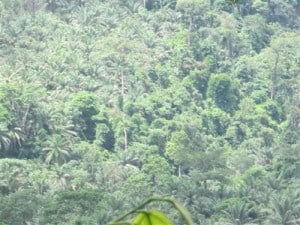 [/one_third]The urgent need for the protection of Chimpanzees and other wildlife species through classification of the proposed Mak-Betchou Wildlife Sanctuary has become very crucial. Biologists of the Environment and Rural Development Foundation (ERuDeF), resounded the exigency, Monday June 12, 2017 after evaluating some 18 biomonitoring surveys carried out between the months of March to May, 2017 in the proposed Sanctuary.

According to one of the biologist, Angwa Gwendoline, the increasing human pressure mounted on the proposed protected area, leaves wanton effects on the wildlife species found in the area.

“During our biomonitoring surveys, we discovered more signs of human pressure on this proposed protected area. We discovered 36 huts, 32 gunshots were heard and 197 expended cartridges picked on the soil,” Gwendoline said.

She recommended that more education and sensitization be carried out to change the mind-set of villagers living adjacent the proposed protected area.

“After visiting some villages in the Njoagwi, Essoh-Attah, and Lebang Fondoms we discovered that many villagers have encroached into the proposed protected area, creating farmlands and setting hunting traps for rodents. Our previous research and camera traps footage have shown that these traps cut off the limbs of Chimps and other wildlife species in the area. So we are suggesting more education be given to the villagers living around the protected area,” Gwendoline said.

The proposed Mak-Betchou Wildlife Sanctuary is an over 6000 hectares forest area located between longitudes 586,000m and 596,000m and latitudes 598,000m and 606,000m. It is host to over 300 Nigeria- Cameroon chimpanzees, over 100 forest elephants and Drills amongst others. The area is also home to some unknown plant species as well as globally threatened bird species. Contiguous to the Bayang-Mbo Wildlife Sanctuary, this biodiversity hotspot is surrounded by three main Fondoms, all located in the Lebialem Division.

The classification process of the proposed Mak-Betchou Wildlife Sanctuary is being facilitated by a Cameroon’s leading conservation non-profit organisation, the Environment and Rural Development Foundation (ERuDeF) in collaboration with Rainforest Trust.