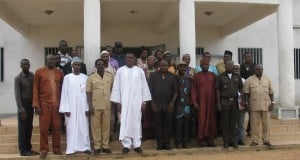 With the technical assistance of the Cameroon non-profit, the Environment and Rural Development Foundation (ERuDeF), the Ministry of Forestry and Wildlife through its Lebialem Divisional office has officially kick started the process for the creation of the proposed Mak-Betchou Chimpanzee Sanctuary.

This was on March, 14, 2014 during the Divisional sensitization meeting for Administrative and Traditional Authorities around the proposed Sanctuary. Chaired by the Lebialem Senior Divisional Officer, Kouemo Simon, the aim of the meeting was to sensitize all stakeholders concerned on the urgent need for Mak-Betchou to be made a full protected area.

Opening the event, the Senior Divisional Officer, Kouemo Simon said the event was very important because ‘We are here to open a new page in conservation in Lebialem’. He cautioned that the process of creating a protected area warrants that all the stakeholders come to a compromise. “This is the reason why we are starting the process today with all the main actors’ kouemo noted that in all the six divisions of the SW Region, Lebialem remains the only division without a protected area. He urged notables and representatives of villages bordering the proposed wildlife sanctuary to support government’s efforts in conserving nature and reap the benefits other divisions with protected area enjoy, such as infrastructural development and eco-tourism.

In a presentation, the SW Regional Chief in charge of Wildlife and Protected Areas, Nono Joseph said that the protection of endangered plants, animal species and their habitat is a priority for the government. “Following the report of ERuDeF who has been doing research in this forest, there are some key species found in this forest such as the Nigeria Cameroon Chimpanzee, a species found only in Nigeria and Cameroon” Nono Joseph said that the SW Regional Delegation is going to follow the procedure for the creation of a protected area “We have just begun. After this sensitization meeting, we are going to continue with the preparation of a Technical Note. This note will be forwarded to the Ministry in Yaounde so that a Public Notice is produced. Once we have this Public Notice, it will be published in all the communities surrounding the proposed Sanctuary and the other steps for creation will follow” Nono Joseph said. On the importance of gazetting the proposed site, Nono said “According to the Forestry Law, permanent forest estate is supposed to make up 30% of the entire forest, but as of now, we have just 17%. This protected area is therefore going to increase the area covered by the permanent forest in Cameroon”. Nono Joseph equally said the presence of this protected area will equally bring about ecotourism and development. He said he is glad that the chiefs were so motivated and hopefully before the year runs out, the process would have come to an end.

On his part, the Representative of the Director of Wildlife at the Ministry of Forestry and Wildlife, Onya Humphrey said “The Minister of Forestry is very committed to see a project of this magnitude to go from beginning to the end. It is in this light that the Director in charge of Wildlife and Protected Area sent me in order to ensure that the due process of gazetting a sanctuary is followed as provided for by the Forestry Law” Mr. Onya Humphrey said the sensitization meeting was just the inception stage and there will be many other meetings. But for a start, he thinks the stakes are high. “All those who have come here have expressed their wish for the process of gazettement to continue and the expected benefits will not only be for the state but also for the communities and the local residents surrounding the area”

In an interview, the Fon of Njoagwi HRH Fon Fotabong Vincent said “I think the protection of wildlife is a good thing to us because it will help bring development in one way or the other. As a leader, it is now incumbent on me to sensitize the villagers not to enter the protected area.” The Fon thanked the government and its technical partner, ERuDeF for the idea to protect the Mak Betchou forest which according to him is rich in biodiversity.

Another leader HRH Chief Julius Fonkwete of Njoagwi Fotabong III said “The creation of the Mak-Betchou Chimpanzee Sanctuary is a new and brilliant idea and we embrace it so positively. So many animals have been destroyed ignorantly by the local people perhaps to earn a living. This has caused the population of some endangered species to reduce drastically. As a leader I will sensitize my people on the need to create this sanctuary” Chief Fonkwete said he is deeply impressed because he understands along the line, the villagers will have some sort of self employment as he gathered from the different presentations. He hopes that the creation will bring road, health and infrastructural development especially given that the roads in his Village Fotabong and Lebialem in general are a nightmare.

On his part, the CEO of ERuDeF, Louis Nkembi expressed his happiness that the project has successfully been launched and thanked the enormous support from MINFOF, MINATD and the traditional authorities. He said the first phase of the program will last for 3 years with initial financial support coming from Tusk Trust UK, French Fund for Global Environment, Man and Nature, France and Trees for the Future USA.

The proposed Mak-Betchou Chimpanzee Sanctuary is located in the Fontem Sub-division, Lebialem Division, SW Region of Cameroon. It has a surface area of over 6900 hectares.The name Mak-betchou comes from two rivers that flow through the forest namely River Mak and River Betchou. This proposed protected area is surrounded by 3 villages namely Lebang, Essoh-attah and Njoagwi. From studies conducted by ERuDeF in collaboration with MINFOF and other technical partners between 2008 and now, the proposed sanctuary inhibits threatened species of wildlife including ,African Forest Elephants, Nigeria Cameroon Chimpanzee, Drills, Antelopes, Bush Pig, and revealing signs of the critically endangered Cross River Gorilla etc. Threatened species of birds are also present in this area including, Bangwa Forest warbler, Bannerman’s Turaco and Cameroon mountain greenbul.