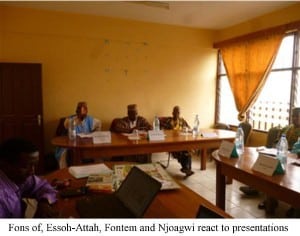 This was the outcome of a meeting, Friday February 12, 2016 at the Conference Hall of the Treasury Department Lebialem division in Menji.

Aimed at soliciting the approval and consent of traditional stakeholders in the creation and eventual management of the sanctuary, the meeting served as an opportunity for the traditional rulers to assess ERuDeF and the Cameroon government’s intervention in the proposed sanctuary.

The custodians of tradition hailed the invaluable role of the organisation and the government of Cameroon in their respective communities most especially in the area of livelihood support and other income generating activities.

The chiefs expressed concerns about the role of the local communities in the creation and management of the sanctuary and the exact land surface to be covered by the sanctuary upon creation.

“we don’t oppose the creation of such a touristic hotspot in our communities all we needed to know is the effect the project shall have on our communities bearing in mind that we are answerable to the people who look up to us as their leaders” explained HRH Fon Foreke of Essoh-Attah Fondom.

They underscored the need for increased sensitization in communities around the proposed protected area and for alternative livelihood support to target those whose activities affect wildlife populations in the proposed Mak-Betchou Wildlife Sanctuary directly. 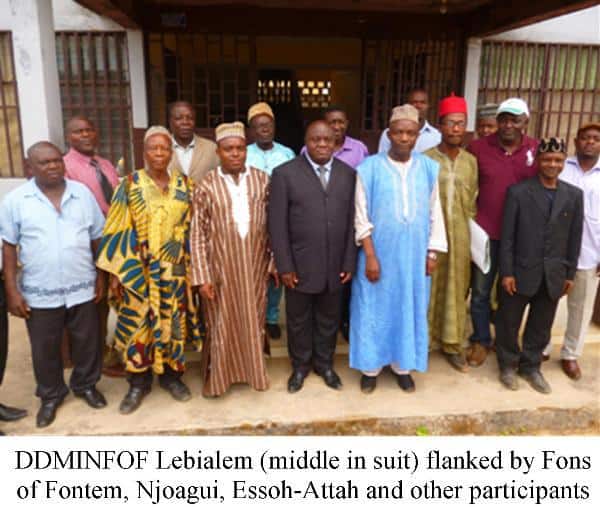 [/one_half]It should be noted that the creation of the sanctuary had been endorsed by the fons of Essoh-Attah and Njoagwi pending final endorsement by the fon of Lebang.

The Proposed Mak-betchou Wildlife Sanctuary currently hosts most of Africa’s last great apes notably the African Forest Elephants, the Nigeria-Cameroon Chimpanzee, some Gorillas, Drills, Forest Buffalos, Duikers and other important birds and plant species which need to be protected.

ERuDeF and the Divisional Delegation of Forestry and Wildlife, have besides research and bio monitoring activities provide alternative livelihoods to farmers and hunters as a way of diverting their attention away from this biodiversity hot spot.

The event also had in attendance the South West Regional chief of wildlife Nono Joseph and elites of the respective fondoms adjacent to the proposed sanctuaries.