‘Network of Women in Conservation, Indispensible in Conserving Cameroon’s Biodiversity’

‘Network of Women in Conservation, Indispensible in Conserving Cameroon’s Biodiversity’ 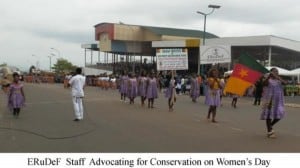 [/one_third]Female staff of the Environment and Rural Development Foundation (ERuDeF) have said the creation of a network of women in conservation in Cameroon is very crucial for environmental protection, the conservation of forest resources, and in catering for women involved in conservation efforts.

They made this expression, March 7, 2016, in a symposium on “the African Woman as an actor in the field of environmental protection and wildlife conservation” organized at the ERuDeF Institute of Biodiversity And Non Profit Studies (ERuDeF Institute) in prelude to the 2016 edition of International Women’s Day celebrations.

Bringing together women of the organization and female students of the ERuDeF Institute, ERuDeF President/CEO, Louis Nkembi and other men of the organization, ERuDeF’s Gender Focal Person, Sheron Endah, in her keynote address, presented the African woman both as an invaluable contributor to development and as key player in land degradation notably through her agricultural engagements.

The African woman she said is not only the hardest hit by desertification, deforestation and misguided environmental policies but also the biggest dependant on the environment and forest for family sustenance.

“African women produce up to 80% of the basic food commodities, are directly responsible for the health and nutrition of their families, play multiple roles at home and in society and respond to the social and economic expectations of their families at the same time…they do up to three quarters of all agricultural work in addition to domestic responsibilities. They understand the environment and forest better due to their direct engagement in activities related thereto.” She explained.

The Acting Director of The ERuDeF Institute of Biodiversity and Non Profit Studies, Madam Akeh Nug, on her part said despite numerous challenges encountered daily by women like gender inequalities, obnoxious traditional practices and complex problems, the African woman remains an inevitable partner in the development of any nation. 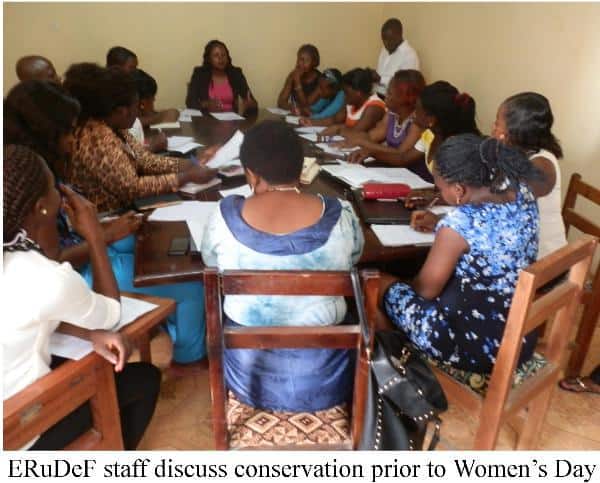 [/one_half]“The woman is not only dedicated to the upbringing of the nation’s leaders but also thanks to her position as carrier of the national bread basket” She said citing unproductive farming practices like slash and burn, farming along the slope and farming at water catchment areas as other challenges that hinder the success of the African woman

Responding to questions from reporters after the event ERuDeF’s Chief Executive and President Louis Nkembi revealed that women hold important positions in the organization like project coordinators, program directors or departmental heads. He acknowledged the veritable role women can play in enhancing the development of any organization even in fields like conservation which to him had hitherto been considered male dominated.

Other activities that characterized the 2016 celebration of the international women’s day in the organization included a football encounter that saw the women of the organization beating their male counterparts 5-4 after post match penalty shoot out, a symbolic tree planting exercise at the Mile 18 water catchment point and a religious service at the Presbyterian Church Great Soppo Congregation.