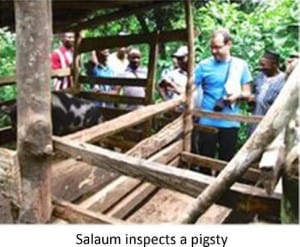 One of the hurdles in environmental conservation is the livelihood of communities living adjacent to protected areas. Suppressing them from exploiting the natural environment for their survival in the name of conservation is often confrontational, hence the need to provide them with alternative sources of livelihoods in order to dissuade them from foraging in protected areas and subsequently conserve the area in question.

Conservation interventions resonate most effectively when livelihood activities are framed in terms of communities’ long-term wellbeing, conservationists and experts say. Thus, communities adjacent to protected areas want to know that they can forfeit their traditional sources of livelihoods and still live well in the same environment protected by law. In this light, ERuDeF with support from French sponsored project known as the Projet de Petit Initiative – PPI3 has been driving this vision in the proposed Mak-Betchou Wildlife Sanctuary in Lebialem, Southwest Region. 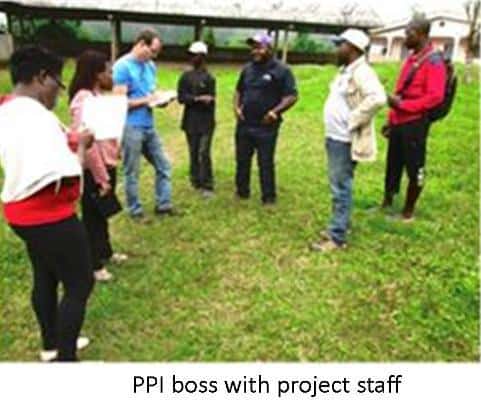 To appreciate ERuDeF’s interventions in the year 2015, the head of the IUCN-Comite Francais through the PPI3 project, Nicolas Salaun, came visiting PPI3 projects under execution by ERuDeF in Mak-Betchou.

The visit ran from November 24 to 26, 2015. At the end of the tour, Nicolas Salaun in a post-monitoring workshop in Menji expressed great satisfaction with the activities on the ground. Salaun said he had been to three African countries to visit IUCN projects there but he had never been as satisfied as he was during his trip with the ERuDeF team.

He told the ERuDeF team to keep up the dynamism and collaboration in the team lead by the vision driver Louis Nkembi. He promised his support to ERuDeF and to tell the sweet story to the IUCN team in France.

The PPI3 head visited projects such as apicultural development, livestock production in the form of pig farming, and the producer cooperative known as the Mak-Betchou Cooperative Society.

Salaun visited the livelihood projects in Essoh-Attah and Njoagwi which are two of the five adjacent communities to the proposed Mak-Betchou Wildlife Sanctuary.

PPI3 supported the creation of the Mak-Betchou Cooperative Society with headquarters in Essoh-Attah, training in bee farming and donation of seventy 70 complete Kenyan top bar beehives, training in livestock production and donation of 70 piglets, creation and training of the Village Forest Management Committee (VFMC), training and equipping of bio-monitors, as well as mapping of the sanctuary and bio-monitoring activities in the proposed sanctuary.

The last stop was at the agro-forestry demonstration farm in Alou where ERuDeF’s agro-forestry technician, Fotso Jean, acquainted Salaun with all the tree species used in agro-forestry to improve soil fertility.

Society also met with officials of the Ministry of Forestry and Wildlife (MINFOF) including the Conservator for Tofala Hill Wildlife Sanctuary who briefed him on the on-going activities in the sanctuary and what ERuDeF has been doing so far.