How Echinops Is Bringing In New Revenue Through ABS

How Echinops Is Bringing In New Revenue Through ABS 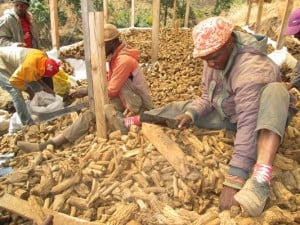 [/one_third]A few years ago, Echinops giganteus was just an ordinary plant in the Mt. Bamboutus area. The locals here had only used its roots, flowers and leaves to spice traditional dishes called nkui and achu. Outside the kitchen, Echinops was, and still, is, a favourite prescription in the rural pharmacy to treat – yellow fever, constipation, cough, abdominal and menstrual pains, general body pains, respiratory problems and hernias. Today, Echinops is a promising ingredient for the perfume industry, and a novel source of revenue and fringe benefits for the population of Magha-Bamumbu in Wabane Sub-division, Southwest Region.

“Since this Echinops project started three years ago in this area I can say everybody has benefited something; the community gains, the collectors have something, the council benefits from it. We are still expecting that the partner at the end of the transformation and selling of the product, will give back to our community 25% of his profit per the Mutual Agreement Terms (MAT) that we signed a few months ago,” says Menkematoh Fabious Leku, Chairman of the Finance Committee Wabane Council.

Menkematoh adds, “The secondary school in Magha has a project to equip the laboratory and the council will be working towards ensuring that this is effectively realized to help the science students who might in the future be taking part in the distillation of this essential oil. Who knows, V. Man Fils may decide to set a factory in this community? I think the future is orange for this community.”

“I can say that the extension of electricity to the Magha-Bamumbu community has been thanks to this ABS project in our community,” says Tafor Nelson.

Saahchia Joan says the Echinops ABS Project in their community caused the planting of trees to protect their water catchment.

“If not of the project I am not sure they could ever discover a place like Magha, talk less of protecting water catchment or building a cooperative here in the village. We are grateful to ERuDeF for bringing the “white man” (V. Man Fils) into our community.”

The V Mane Fils company, which deals in fragrance and flavours, discovered the potential value of the Echinops roots for the fragrance industry. Meanwhile, ERuDeF has been working with the local provider community (Magha-Bamumbu) to ensure the sustainable production and management of the genetic resource.

The Magha-Bamumbu Echinops ABS Project is protected by the international framework of the Nagoya Protocol, which encourages the fair and equitable distribution of benefits arising from the exploitation of genetic resources and related traditional knowledge.

A Pre-Prior Informed Consent was signed in 2012 with the Magha-Bamumbu community initiating research on the plant. In 2014, V Mane Fils signed a Memorandum of Understanding with the Ministry of Environment, Protection of Nature and Sustainable Development (MINEPDED) to exploit genetic material from the Echinops roots.

Negotiation of a first ABS agreement between the Cameroon government and the user company materialized with the signing of the MAT that covered the commercialization phase in April 2015.

The very first collection of Echinops roots for the commercialization phase and the money was later shared out following the distribution line as stated in the MAT document.

A management committee of the Echinops ABS Project and a cooperative were formed to facilitate the operations of the project.

With support from the GEF Small Grant program, the Magha-Bamumbu community through their local groups, have received a series of trainings on financial management and record keeping, projects writing, agroforestry development and trees planting.

“Thanks to the Echinops ABS Project, we have received numerous trainings on financial management, records keeping, micro-projects developments and small business management. We are now capable of keeping records of our activities in order to know whether the business is profitable or not,” says Landanus Tandwun, President of Mt. Bamboutos Echinops Cooperative Society (MoBeCoS).