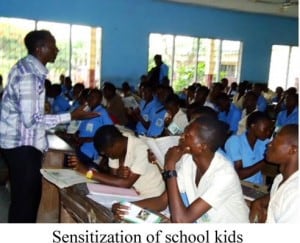 [/one_third]Strengthen the capacity of schools and communities for elephant conservation in the Proposed Mak-Betchou Wildlife Sanctuary in Lebialem, Southwest Region, is being carried out through nature art and crafting activities in environmental clubs. ERuDeF which is facilitating this capacity building aims to create general awareness for the protection of wildlife resources and reduce the fragmentation of wildlife habitat.

The capacity building project will be carried out in adjacent schools and communities in the proposed Mak-Betchou Wildlife Sanctuary, an important elephant corridor located between Banyang-Mbo Wildlife Sanctuary and Korup National Park in the Southwest.

In this area, elephant population suffers a lot of human pressure due to encroachment into the proposed protected area for farming and poaching. This deteriorating condition of the environment requires actions for the propagation of environmental protection and conservation for sustainable development.

These villages are selected according to their proximity to the proposed Mak-Betchou Wildlife Sanctuary.

Football tournaments will constantly be organized in the area with teams using names of different wildlife species. For book support to schools, book lists approved by the government will be collected from school heads for assessment. Donation of conservation books to schools will be done after assessment of book shelves in all schools concerned and a memorandum of understanding will be signed between the donor and the school leader to avoid misuse of the books.

Further capacity building of local communities for active participation in wildlife conservation will be done through the different Village Forest Management Committees (VFMCs) already in place with emphasis on elephant conservation.

A weekly program will be organized with Lebialem Community Radio manager and broadcast on air to create more awareness for elephant conservation. At the national, Divisional and Sub-divisional levels, people would frequently be abreast on major activities implemented on the field through the radio program. Flyers and monthly newsletters summarizing key activities promoting wildlife conservation would frequently be produced and distributed free of charge to students and community members. At the end of the project, communities and schools will be able to contribute to the protection of forest elephants in the proposed Mak-Betchou Wildlife Sanctuary through their participation in the management of the sanctuary.