The Retired Policeman and Natural Fertilizer 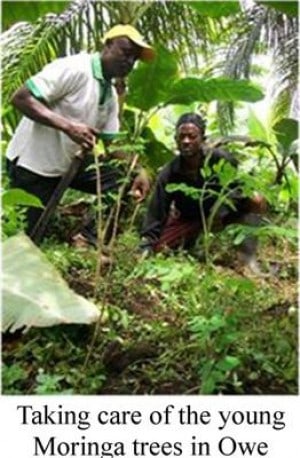 Atunga Victor was trained as a policeman. After retiring from active service, he enlisted with Trees for the Future in 2011 thereby integrating himself into agriculture agro-forestry in order to continue supporting his family.

Atunga is the president of a group called the Hope Rising located in Owe, Muyuka Sub-division, Southwest Region. The retired police officer did not hesitate to partner with ERuDeF and he was immediately introduced to and trained in all techniques of agro-forestry.

Together with ERuDeF’s team of agro-forestry technicians, Atunga developed a demonstration farm for the Hope Rising group where species of Acacia, Leucaena, Calliandria and Moringa were planted. The former officer boasts of possessing over 20,000 different types of agro-forestry species of trees planted on his farm. These include, Leucaena, Calliandria, Moringa and Prunus.

Atunga is a contented man who is enjoying enormous benefits from practicing agro-forestry over the years.

“Partnering with Trees for the Future has not been a waste of time, for it has it has improved on my income and the standard of living of my entire family,” says Atunga, “agro-forestry has changed the lives of my household through increased yields from alley cropping.”

Atunga also mixes the leaves of Acacia and Leucaena with feed for his pigs and goats to obtain more protein, thus making the animals to grow healthier and bigger, consequently fetching him more money on the market.

“All parts of the Moringa tree are beneficial; the leaves, flowers, bark, pods, seeds and the roots. These can be eaten raw or the dry leaves can be added to tea, thereby curing general fever. I also sell extracts from the Moringa trees (leaves, seeds and flowers), this gives me extra income. Consuming Moringa also strengthens our bones, it treats gout and rheumatism,” says Atunga.

With all the benefits from agro-forestry, Atunga has been able to gain more income from greater farm outputs. Money that he would have used to purchase fire wood and medication for his family now he uses to further his children’s education at the university.

Atunga has gone beyond just using agro-forestry species to fertilize his crops, maintaining soil fertility and generating extra income. He has encouraged many people to adopt and practise agro-forestry. From his demonstration farm, other farmers have implemented the same technology in their individual farms for soil fertility improvement, live fences to prevent stray animals from destroying crops, stakes for beans and medicinal purposes.