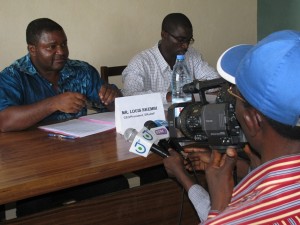 The Cameroon Program of US Charity, Trees for the Future has held a press conference to disclose its route map for 2014. The press conference took place on March 28, 2014 in Buea. In a presentation, the Country Assistant, Neba Kingsly took the press down memory lane on how the program started in 2007 and how it has succeeded in planting over 6 million trees in farmer’s field and degraded lands in the Western Cameroon Highlands. He explained that in 2013 alone, Trees for the Future, Cameroon Program also known as TREES Cameroon planted about 2million trees. Kingsly Neba explained that the program is focused in four main geographical areas notably the Bamenda Highlands, the Mt, Bamboutos ecosystem, the Muanenguba mountains and the Mt Cameroon ecosystem.

Corroborating this, the Country Director, Louis Nkembi told the press that the Program anticipates to plant over 3 million trees throughout the four geographical watersheds and beyond. He added that, introducing the Forest Garden Model would help improve the economic efficiency of the farm and quadruple incomes of household. “The model is a four year model that would involve the training of over 2000 farmers, working in over 70 communities. This by the fourth year would increase incomes of farmers thereby improving on their livelihood”. Louis Nkembi said. He continued by saying farmers would be able to increase and sustain food security as well as income generating opportunity in an environmentally sound manner. Louis said this model would diversify crops both for better food availability, farm product marketability and adaptation of improved land management techniques.

In order to meet up with this new model, TREES Cameroon anticipates to create 7 central nurseries of a capacity of 20000 seedlings which would serve as production center for improved planting stocks that would be distributed to farmers. The already existing agroforestry farms would be transitioned into Forest Garden by adding more economic species. And at the same time continue to plant our regular agroforestry species.

The Press were also informed that by the end of 2014, TREES Cameroon would leave those communities that have become self sufficient and move to other communities.