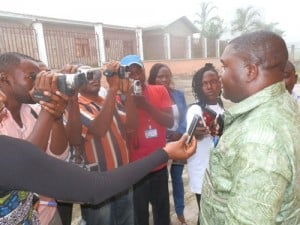 The Environment and Rural Development Foundation (ERuDeF) has launched the first edition of the Green Vision newspaper in Buea-SW Cameroon. This grand launching took place on June 17, 2013, at the conference hall of the Regional Delegation of Public Service.

The event brought together civil society leaders, government officials and saw a huge media presence. In a speech, the CEO of ERuDeF who doubles as Managing Editor for the paper, Louis Nkembi said the Green Vision newspaper seeks to inform the public of the threats the environment is facing and proposes measures that can be taken to address these problems. He explained that the Green Vision has not come to compete with other newspapers but to complement them and influence positive government action. He added that information found on this paper has been investigated and adequate research has been conducted for accuracy.

A review of the paper was done by a Senior journalist, Martin Nkemngu, who praised the idea of environmental reporting. Martin Nkemngu explained the different topics which were treated in this maiden edition. The topics ranged from wildlife conservation to reforestation to pollution and water scarcity. He noted that just like the slogan of the paper “Serving and Saving the Cameroon environment” the paper would go a long way in bridging the current gap in the media landscape with regards to environmental reporting and help to preserve Cameroon’s rich environment.

Speaking at the event, the Chairperson, acting Regional Delegate for Communication, Ms. Achu Rossette said Cameroon has never been gifted with a communication channel that disseminates information on the environment to the public. She used the opportunity to call on other journalists to venture into environmental reporting.

Ms. Achu’s speech gave way to the launching proper. The Chief Launcher, Anu Vincent who is the CEO of a developmental NGO called Nkong Hilltop kick started the launching, wishing the paper a long life. Other personalities present also partook in the launching by getting copies of the paper. A total of over 200 copies were distributed on the spot.

Speaking on the distribution of the paper, the Coordinator of the Paper, Regina Leke said that the Green Vision Newspaper would reach every nook and cranny of the nation. She explained that 2000 copies were produced and are already on newsstands around the country.

Civil Society leaders React to the birth of the Green Vision

The birth and launch of a new born baby into the media landscape-The Green Vision sparked up a heated debate among the civil society leaders at the event. Peggy Manga of World Wide Fund for Nature (WWF) said it was a novelty which must be encouraged. The President of a developmental NGO Nkong Hilltop said the Green Vision is timely given that Cameroonians lack knowledge on how to take care of their environment, a gap which the Green Vision fills. The Communication Officer for the Wildlife law enforcement organization-Last Great Apes Organisation (LAGA) said the Green Vision would be a good tool to fight wildlife crimes. He expressed his wish to be a part to this novelty and contribute towards wildlife conservation. The Executive Director of a Cameroonian Nature Conservation organization, Nature Cameroon, Ngwese Dominic said lack of information and knowledge has led to poor environmental practices. Mr. Ngwese hoped that the paper would trigger a breakthrough. Martin Nkemgu of Tourism school said the Cameroon media landscape falls far short of specialized reporting. He noted that in his 30-years of practice as a journalists he realized that environmental reporting just like other specialized fields have not been given adequate media attention. He therefore lauded the idea and wished the Green Vision a long life.