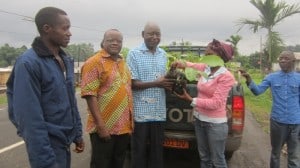 [/one_third]Some 6000 additional trees have been planted in the community forests of Woteva and Bakingili in the Mt. Cameroon area in the Southwest Region. A team of ERuDeF technicians working for the Conservation of Threatened Trees Project and the Regional Delegation of Forestry and Wildlife, the Mount Cameroon National Park and the local communities planted African mahogany (Entandrophragma angolenses),Tiger wood (Microberlinia bisulcata), Pygeum (Prunus africana), Iron wood (Lophira alata) and Country onion (Afrostyrax lepidophyllus)between June 2-17, 2015. This is a continuation of a similar activity which took place in September 2014 with the planting of over 8000 threatened trees into these same forests.

“Reforestation in this community is coming as an answered prayer to us because one of the principles of community forests is reforestation,” said Bernard Woloko, chief of Woteva village.

“The trees will boost up our forest ecosystem that has been completely cut down by our ancestors without replacement,” added Chief Woloko.

The Woteva Community Forest was created in 1994 with focus on regeneration.

“We are hoping that through ERuDeF’s effort of raising these seedlings and donating to us, our forest will regenerate. We are grateful to ERuDeF and her partner for this initiative and for choosing our forest for the activity. I pray that this community commitment should not only end at the level of tree planting but let there be some level of management and monitoring till a certain stage of maturity is reached,” Chief Woloko said.

Ndumbe Ekema, technical adviser to Woteva Community Forest, equally hailed the efforts made by ERuDeF and her partners.

“We have 90% survival rate of the trees we planted last year and we hope to have more than that this year,” said Ndumbe. He said the trees will restore the population of some species which have become rare and this will be for the benefit of the future generation.

“Illegal harvesting and encroachment have threatened some important trees in this forest to near extinction despite our struggle to control the forest,” Ndive said. He appealed to ERuDeF to donate other species that can equally serve as poles, saying he went through ERuDeF’s website and saw a program as such.

“This activity is actually helping us because our forest has been encroached into by farmers and the Cameroon Development Corporation (CDC). The presence of these trees in the forest is reason why we should have a proper monitoring strategy,” said Genesis.

The Woteva and Bakingili communities signed memoranda of understanding, each pledging to plant and manage the trees till maturity and to harvest them according to their management plans.

A similar activity will soon be conducted both at the borders and in degraded areas of the Mt. Cameroon National Park borders.

The Mt. Cameroon Threatened Trees Project is sponsored by the UK Charity organization, Fauna and Flora International and The Global Trees Campaign Program. It is implemented by ERuDeF (Environment and Rural Development Foundation), with the services of the MINFOF (Ministry of Forestry and Wildlife) and MCNP (Mt. Cameroon National Park).