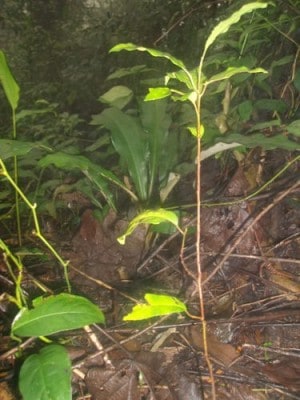 The Environment and Rural Development Foundation (ERuDeF)’s efforts to conserve and restore globally threatened trees in the Mt Cameroon Nation Park (MCNP) and the peripheral zones is yielding success. Out of the 4724 seedlings of different threatened trees species planted in May 2016, over 90% are surviving.

This observation was made during an assessment conducted by ERuDeF and the MCNP teams last July 2016 aimed at evaluating Prunus africana (Pygeum), Entandrophragma angolensis (Tiama mahogany) and Lophira alata (Azobe) seedlings planted at the MCNP borders in May 2016.

During the evaluation exercise, Pygeum recorded 99.5% survival rate as 2040 of the 2050 planted survived while Mahogany recorded 99.6% survival rate meaning 1568 of the 1574 planted are doing well. For Azobe, 98 seedlings survived out of the 100 planted. 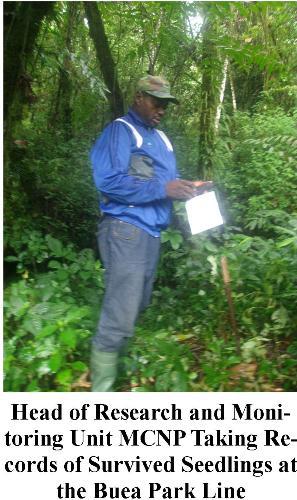 Because of this high survival rate, the Head of Monitoring and Research Unit, MCNP Mbeng Henderson, appreciated ERuDeF for her endless efforts in restoring the biodiversity of the Park and in providing alternative livelihoods to the bordering communities in the future.

“With the rapid adaptation and survival of these species, the Park and the communities are sure of a good number of timbers in the years to come,” Mr Mbeng said.

He equally applauded the efforts of the surrounding communities who took part in the planting exercise. 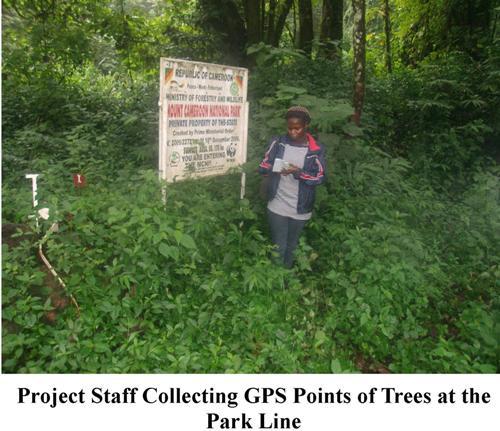 “The communities who took part in planting actually knew what they were doing and were conscious of the importance of the species. They have followed strictly the planting spacing and the distribution of different species in different points” the Head of the Monitoring and Research Unit applauded.

Mr Mbeng Henderson said MCNP has raised Pygeum seedlings in the nursery to continue the planting process. He appealed to ERuDeF to continue with the collaboration so the trees planted can be maintained till a stage of independence.

“These trees are tiny and for us the Park to effectively maintain them, we need an amount of support from ERuDeF”, Mbeng explained.

The Mt. Cameroon threatened trees project was conceived in September 2011 with aim to conserve and restore globally threatened trees in the MCNP and the peripheral zones. It is implemented by ERuDeF in collaboration with the local government stakeholders (Ministry of Forestry and Wildlife and the Mt. Cameroon National Park Service) with support from Fauna and Flora International (FFI) and Mohamed bin Zayed (MBZ) Species Conservation Fund.