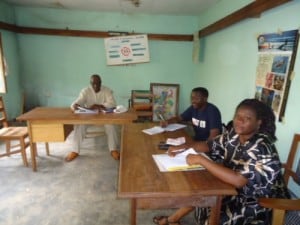 In order to reduce human pressure on the rich biodiversity of the Lebialem Highlands Conservation Complex, the Environment and Rural Development Foundation (ERuDeF) and the Lebialem Divisional Delegation of the Ministry of Environment, Protection of Nature and Sustainable Development (MINEPDED) have agreed to come up with a harmonised conservation and reforestation strategy.

This agreement was arrived at during a meeting, August 4, 2016, at the MINEPDED Divisional Office in Menji.

Aimed at finding lasting solutions to the unsustainable exploitation of the biodiversity of the Lebialem Highlands Conservation Complex, these two institutions agreed to reinforce sensitization campaigns, provide alternative sources of energy and livelihood to communities within the Conservation Complex.

Representing ERuDeF at this meeting, the Education for Sustainable Development (ESD) Programme Coordinator, Samuel Ngueping, said many communities within the Lebialem Highlands Conservation Complex have as a result of poverty, resorted to environmentally unfriendly actions like deforestation, hunting, trapping, bush burning and the application of chemical fertilizers. These activities according to him, are depleting the Highlands’ biodiversity and making the area prone to landslides and soil erosions.

To ameliorate this plight, ERuDeF and MINEPDED officials underscored the need for the provision of improved cooking stoves. This according to them, will replace the use of fuel woods and limit deforestation in the Highlands.

“If deforestation is not halted, the human community would be put in great hardship. I hope to see stronger actions adopted after the fight against deforestation in the Division and the country at large” said Mr. Kanyimi Ihimbru Charles, the Lebialem Divisional Delegate of MINEPDED.

The Chief of Bureau for Environmental Conservation and Monitoring of the Delegation of MINEPDED, Lebialem, Ms. Nkwelle Maureen Tabi, on her part congratulated ERuDeF for her willingness to collaborate for the betterment of the environment in the Division and the country as a whole.

Meanwhile, plans are underway to regenerate the landscape through tree planting and to introduce farmers within the highlands to more sustainable farming methods in order to reduce the use of bush fire in the area.