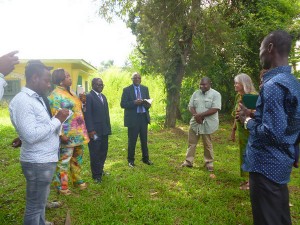 The Conservation Officer for Rainforest Trust in-charge of Central Africa and Madagascar, Dr Sally Lahm, has extolled the Environment and Rural Development Foundation (ERuDeF), and the Cameroon Herpetology-Conservation Biology Foundation (CAMHERP-CBF) for the progress made so far in the classification of the proposed Mt Manengouba Herpetological Sanctuary.

She expressed her ecstasy recently, during her visit to one of the project sites in the Littoral Region of Cameroon.

This visit that had as objectives; to evaluate the achievements, challenges and proposed way forward for the project took place on April 12 and 14, 2018.

In a series of meetings and audiences granted, the Conservation Officer expressed satisfaction with the developments made so far in the achievement of the project’s goal. She equally made some pertinent remarks, recommendations, and follow-up mechanisms, that will be strictly implemented to facilitate the process.

Her first meeting was held at the Divisional Delegation of Forestry and Wildlife, Moungo, Littoral Region. Welcoming the team, made up of the Rainforest Conservation Officer, Dr Sally Lahm, the President and Chief Executive Officer of ERuDeF, Louis Nkembi, CAMHERP-CBF representative, Miss Takwi, as well as the coordinators of the project, the Divisional Delegate, NLEGUE Etienne Hyacinthe, said the project has been evolving progressively towards the right direction.

Explaining the legal framework that will eventually see-through to the gazettement of a protected area in Cameroon, the Delegate said the proposed Mt Manengouba Herpetological Sanctuary is on the right footing, and will eventually be gazetted soon.

“MINFOF team has to go to the field to confirm results presented in the Technical Note before submission to the Ministry of Forestry and Wildlife. From there, the Ministry shall sign the Public Notice, which marks another milestone in achieving the project goal. On this, I will appeal to the two facilitating NGOs; ERuDeF, and CAMHERP-CBF, to always involve the MINFOF team, in every process of the execution of the project. In that way, we shall facilitate the entire process,’’ NLEGUE Etienne Hyacinthe added.

On her part, Dr Sally Lahm, appreciated the efforts the government has been putting so far. She encouraged the Delegation of Forestry and Wildlife, to redouble its efforts, so that all delays experienced in the past, could be minimised. 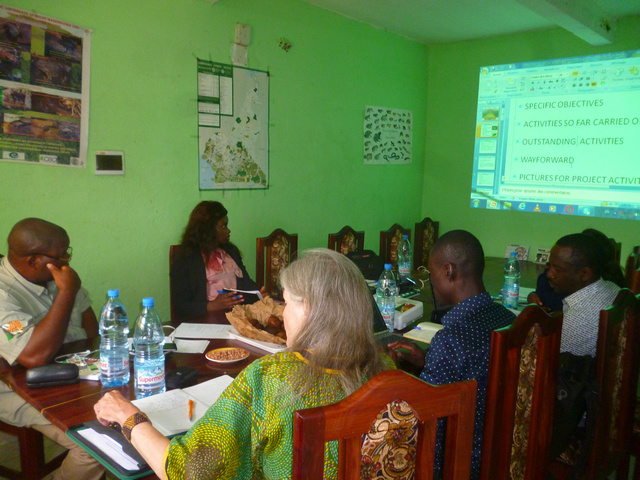 The second meeting was held with the Rainforest Trust Conservation Officer, and the implementing organisations; ERuDeF and CAMHERP-CBF. The meeting that took place at the Divisional Headquarters of Moungo, Nkongsamba was aimed at evaluating the achievements and challenges faced by the Mt Manengouba project. After presentations from the project coordinators, Fai Elvis from CAMHERP-CBF, and Stanley Acham from ERuDeF, Dr Sally Lahm expressed her concern on the low execution rate of the project activities and urged the team to redouble their efforts and ensure that the proposed new deadline of activities should be respected.

The Conservation Officer also paid curtesy visits to two communities adjacent to the proposed protected area. While visiting Nsoung village, the local population expressed satisfaction in the project execution. They pledged their support to the project, adding that if the end result shall see the development of their village, then they throw-in their full support. Meanwhile, the entire community of Mouamenam demanded for transparency and the right approach in execution of the Mt Manengouba project.

Mount Muanenguba which cuts across the Southwest and Littoral regions of Cameroon is said to have a heterogeneous Ecosystem, harbouring 100 species of amphibians, 89 species of reptiles and 270 bird species amongst which 60% of them are endemic.

The mountain with height of 2411 meters above sea level, suffers chronic threats from communities living adjacent to the mountain. Habitat degradation, which involves conversion of natural land for agricultural land through shifting cultivation, destruction of trees for commercial purposes, overgrazing and trespassing of cattle in streams and water ponds, collection of amphibian and reptile species, amongst others, are the main threats rocking the mountain.

Faced with all of these challenges, Cameroon’s leading conservation NGO, the Environment and Rural Development Foundation (ERuDeF), joined forces with the Cameroon Herpetology-Conservation Biology Foundation (CAMHERP-CBF) to conserve the rich biodiversity and Ecosystem of Mount Muanenguba with focus on Amphibians and Reptiles.

The project is being sponsored by Rainforest Trust.