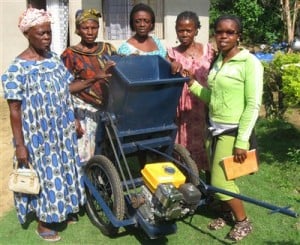 A team of economists from Cameroon’s leading conservation Non-Profit NGO, the Environment and Rural Development Foundation (ERuDeF) are carrying out feasibility studies on the establishment of cottage industries that will contribute towards enhancing conservation efforts in the Lebialem Highlands Conservation Complex.

Aimed at improving on the livelihoods of communities adjacent to biodiversity hotspots within the Lebialem Highlands, the first phase of this study which commenced last April 2017 was focused on the identification and valorisation of Non-Timber Forest Products (NTFPs) in adjacent villages to the Tofala Hill Wildlife Sanctuary and the proposed Mak-Betchou Wildlife Sanctuary.

At the end of the first phase of the study, the Director of the Department of Livelihoods and Economic Development, Rene Mbah, underscored need for establishment of a cottage industry with various transformation units that will induce economic value chain development of NTFPs within the Lebialem Highlands Conservation Complex.

“After spending over three weeks moving to some nine selected villages within the peripheries of the Tofala Hill Wildlife Sanctuary and the proposed Mak-Betchou Wildlife Sanctuary, we discovered that these villages are endowed with a lot of NTFPs. Unfortunately, the people are not maximising the rich valuse these products and their transformation importance. Consequently, they are being exploited by buyers from neighbouring towns like Dschang, Mamfe, Guzang, and Baffousam, who come and buy the products at very low cost leaving the people with low household income. So we have discovered that establishing a cottage industry in this area with processing units not just for identified NTFPs but other products like cassava, honey, palm nut and potatoes is of utmost importance,” Mbah explained.

Discovering the urgent need for the establishment of a cottage industry with different transformation units within the Lebialem Highlands, Rene Mbah, and his team, have since April being engaged in research to make sure that at least two of such processing units go operational by June 2017.

The Livelihood and Economic Development Director and his team noted that the cottage industry will be owned and run exclusively by women given that they are the ones whose activities greatly impede conservation efforts within the Complex.

“We have observed that in most homes in this area, women are the bread winners. Unfortunately, they are not economically empowered. So, they have no choice than to engage in farming, most of the timecutting down trees and lighting fire within biodiversity hotspots to open up farms. So focusing on them and empowering them economically and socially will divert their attention from biodiversity depletion to other income generating activities using the cottage industry,” Mbah and his team justified.

While studies are being concluded on the establishment of the cottage industry within the Lebialem Highlands, Rene Mbah revealed that they have mapped out a training programme for the women on the collection, transformation and marketing of the products in question.