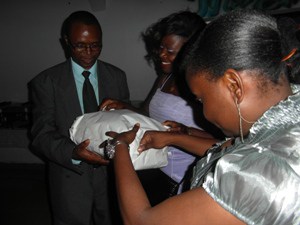 The Environment and Rural Development Foundation (ERuDeF) has in a ceremony that took place in Buea, SW Cameroon, on Monday, April 1 officially bid fare well to

Technical Advisor of UK Charity, Fauna & Flora International (FFI). Mr Norman Rigava, 45 who leaves for his homeland, Zimbabwe has been a Technical Adviser to ERuDeF for the last 21 months. During his stay in Cameroon, he was the focal point for the creation process of the Proposed Tofala Hill Wildlife Sanctuary. Through tact, meticulousness and diplomacy, Norman Rigava was able to move the process to its present near completion stage.

The send-off party which brought together government officials, Norman’s collaborators and the entire staff of ERuDeF was therefore a way of saying “thank you” as the President/CEO of ERuDeF puts it “When I met you and worked with you, I knew I had not only met a colleague in conservation, but a brother and a friend. Your tact in handling the negotiation process of the Proposed Sanctuary gave a very big push and we hope that when next you are coming here, you would be coming to celebrate the series of fully protected areas. Thank you very much and God be with you”. To add, Louis Nkembi said that Norman recently demonstrated his intense attachment to the organization when he declared his intention to be one of the board of trustees for ERuDeF’s Institute of Biodiversity and Non-Profit Studies (IBiNS).

Also speaking during the ceremony, ERuDeF’s Director of Administration, Ms Seemndze Ita thrilled the audience with an in depth profile of who Mr. Norman is. She regretted his leaving but insisted that, given that the world has become a global village, Norman leaves but would remain with ERuDeF through constant communication. She concluded with a breath-taking song calling on the Lord to be with Norman wherever he goes. Also speaking during the event, the SW Regional chief of service in charge of Wildlife and protected area at the Ministry of Forestry and Wildlife, Eboule Emmanuel praised Norman Rigava for his assiduity in the making the people of Tofala understand the importance of conservation. This was followed by the presentation of a send-off gift from the organization and from staff of ERuDeF.

On his part, the father of three could not hide his joy in his words “I feel so happy today. I came to Cameroon and met a brother in the person of Louis. I admire him very much for his diligence in managing the affairs of ERuDeF and I know strongly that in some few years to come, ERuDeF would be one of the leading conservation organizations in the country. I am already part of ERuDeF and I know that even though I leave, I remain with them”