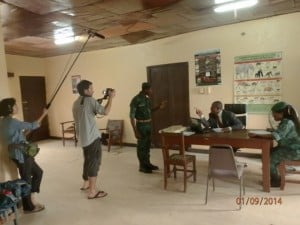 The Environment and Rural Development Foundation (ERuDeF) in collaboration with the University of Colorado USA and Wildlife Conservation Society (WCS) has begun producing a series of short wildlife films that will enhance the conservation of the cross river gorilla and its habitats in Cameroon and Nigeria.

Dubbed Gorilla Folk Films from the Cross River Delta, the short wildlife film series, “made with and for folks in Nigeria and Cameroon” depicts the various threats gorillas and habitats are faced with in Africa, and some pre-colonial and colonial practices that aided the conservation of wildlife and habitats in Cameroon and Nigeria

The first phase of this series, which is shot in and with local communities adjacent to Cross River gorilla habitas in Nigeria and Cameroon, started in Nigeria with the production of the first draft of two short films; Obi and the Juju Forest and Conservation Education.

Meanwhile the second phase of the project which started last August with the objective of producing at least three short films in Cameroon for the series, has just completed the production of the first draft of the first short film in Mamfe; Chop Gorilla.

The production team under auspices of a PhD student from the University of Colorado, Adam P. Hermans is bracing up for the production of the second and third short film in Tofala and Njikwa in Northwest and Southwest Cameroon respectively.

According to the Project Coordinator Adam P. Hermans, upon completion the series will be screened at schools and communities across Cross River, Nigeria and South West, Cameroon as a tool to foster sensitization efforts for the conservation of the Cross River gorilla and their habitat.

Meanwhile plans are underway to continue making such folk films with many other communities for many other animals/wildlife species and conservation situations.