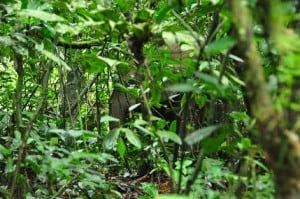 Just over six weeks after Researchers working for the Environment and Rural Development Foundation (ERuDeF) spotted two Forest African Elephants in the Mak-Betchou Forest in the Lebialem Highlands, three other Forest African elephants have come face-to-face with Researchers in the same Forest. The Researchers A. Tabi (ERuDeF) and Léo Pierre from the Paul Sabatier University, Toulouse III spotted the world’s largest mammal on July 10, 2013.

The elephants, made up of two adults and one juvenile were spotted foraging on herbs found around a small stream in the forest. When first spotted, the juvenile fled but the two adult elephants stayed on and continued to forage. The Research team observed the animals for about 30 minutes before leaving the scene.

Just to note the that Mak-Betchou Forest does not only harbour the African Forest Elephants but the threatened Nigeria-Cameron chimpanzee (Pan troglodytes elloiti) and an unconfirmed presence of the critically endangered Cross River Gorilla (Gorilla gorilla diehli).

These Elephants and other wildlife species are constantly faced with expanding human activities and poaching in this forest block, which if not controlled might lead to an “empty forest syndrome”.

As a keystone species, elephants play a crucial role in maintaining linkages in the food web, and their extermination from their habitats may cause a cascade of change or extinctions in Mak-Betchou forest ecosystems. Evidence suggests that elephants diversify forest ecosystems when free to move.

The Environment and Rural Development Foundation (ERuDeF) and her partners will continue to fight for the survival of these large mammals. It is against this backdrop that ERuDeF is currently working with the Cameroon government towards making the Mak-Betchou Forest a complete protected area. Some of the communities closest to this forest block include Andu, Etabang, Elumba, Fotabon II, Fotabon III, Etodi, Fosongwanchen. These villages have hunters whose hunting activities remain a serious threat to the existence of these animals. This implies a strong sensitization campaign would be imperative to raise awareness on the need to protect these animals and guarantee a safe haven for them.