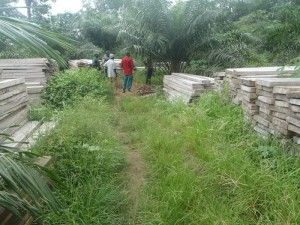 Authorities of the Southwest Regional Brigade of the Ministry of Forestry and Wildlife have recently intercepted the transportation of over 1400 pieces of sawn Microbelinia bisulcata which were headed for Douala by an illegal exploiter, Tsafack who possessed neither authorization nor exploitation permit.

Chief Ngoh James of Dikome Balondo village said the Forestry chief of Post of the area had presented Tsafack to the community for exploitation. The villagers accepted without any reservation given that the exploiter was with the chief of post- a government official, and the species was considered a hindrance to the growth of their crops. To this regard, the chief of post reportedly advised the villagers not collect money in exchange of the trees but rather to ask the exploiter to reward them through a developmental project in the community. To this effect, the villagers went into verbal agreement with the exploiter in which he was to exploit and saw out 10.000 pieces of logs and in return construct a modern community hall of 15m X 8m consisting of two bedrooms, a conference hall and 2 modern toilets. Consequently, he exploited and transported 2 trucks of the species on two occasions. On the third occasion, the villagers held the truck filled with sawn pieces of Zingana hostage because he had not commenced his side of the bargain as promised. To this effect, the verbal agreement was transformed into a written agreement with the community. On a patrol to area by the South West regional MINFOF brigade team supported by ERuDeF, a pile of over 1400 sawn pieces of Zingana were found pending transportation to Douala by Mr.Tsafack in the village. The MINFOF team confiscated the sawn logs using the official forestry hammer and reported the matter to the Regional office and area gendarmes which prompted the detention of the illegal exploiter. He was charged 2 million FCFA as fine and damages caused which was to be paid into government treasury before his release.

Nonetheless the villagers still interrupted the confiscation and auction of the logs by MINFOF authorities. They argued that the logs could not be auctioned because the owner of the logs –Tsafack had gone into agreement with the community before exploiting the species and till then had not executed his terms of the agreement. The Regional Delegate of Forestry Mr Ebai Samuel together with his team summoned a conflict resolution meeting at the community. In the presence of the Divisional Officer of Bamusso Mr Ndille Joseph, community members and ERuDeF staff, the conflict was sought to be resolved.

In response to this, the Regional Delegate said the wood had to be auctioned and the money paid into the government coffers. RDFOF however said that given the underlying circumstance, he would talk with his team and seek to consider that 50% of the logs are given to the community to sell and use the money to complete the hall while 50% is auctioned and money paid into the government coffers.

Reacting to the unfortunate circumstances, the project Coordinator of the Mt Cameroon threatened trees project at ERuDeF, emphasized the need for protecting these trees whose population has declined almost to extinction due such illegal exploitation.

Microberlinia bisulcata commonly called zebra wood or Zingana is found within the lowland forest of Mt Cameroon. Recently the specie has been undergoing serious threat of extinction as illegal exploiters haul logs out of the forest everyday . The species which is critically endangered and endemic to the area is highly sawn for its beautiful hard stripy timber for furniture. Given that the Cameroon government recently issued a ban on another threatened species Gebourtia mannii (Boubinga) which was highly exported, the recent upsurge has been on Zingana as a substitute in the black market of timber. Hence the illegal logging of the relics of the zebra wood or Zingana within the lowland forest of Mt Cameroon has been appalling. Nonetheless the services of South West Regional brigade of Forestry and Wildlife in collaboration with ERuDeF has been putting measures to stop the felling of these trees through the introduction of anti-logging patrols supported by the UK Charity Fauna and Flora’s Global Tree Campaign project.