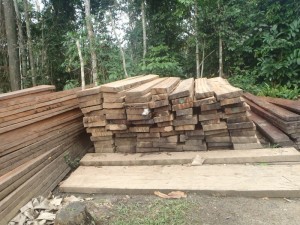 There is a risk of the globally threatened tree species Microberlinia bisulcata commonly referred to as Zebra wood or Tiger wood getting extinct in the Mokoko Forest Reserve of the Mt Cameroon area. A recent field visit carried out by a team from the Environment and Rural Development Foundation (ERuDeF) reveals that the rate at which this tree is being exploited has skyrocketed. The team working for the project Conservation of threatened trees at Mt Cameroon watched with dismay tons of zebrawood sawn and extracted from this reserve which harbors the relics of this critically endangered species. The species is highly hunted and sawn by exploiters for commercial purpose. Zebra wood has beautiful stripes which give furniture made from the species attractive.

The illegal exploitation of this wood in the Mt Cameroon forest is a whole organized trade. Illegal exploiters set up camps within the reserve borders and spend weeks and months within the reserve cutting the trees. They cut down the zebra wood from the Mokoko Forest area of Ekumbe Mefako with little or no knowledge on the national and international laws governing the management of the species. Harvesting is carried out indiscrimately and this could be hazardous if measures are not put in place to curb the situation. The exploitation team usually consists of sawyers, transporters locally referred to “Bambes” who carry the sawn wood from the forest to the road side for transportation by trucks to the big markets. There is equally the main exploiter -who presumably owns the chain saws. More often than not, the head of the team already has a market for their produce; this could be local or international.

One of the Labourers who spoke to the ERuDeF team on condition of anonymity said “although the wood is reducing, it has a high demand in the local markets for furniture” According to this Labourer zebra wood will never get finish, hear him “the forest is our natural endowment from God, and would regenerate naturally when we let it fallow…”

The species is not only cut down for timber for furniture but also by farmers due to ignorance to the relevance of its high nitrogenous contents which enrich soils and render them fertile. They cut down the species in their farmlands for sunlight and to increase their farmland

This species endemic to the Mt Cameroon area was previously found in abundance within the lowland tropical forests of Mt Cameroon at Southern Bakundu, Mokoko Forest reserves but statistics have revealed it has reduced by more than half in the last five years due to the wanton exploitation of the species.

Even though ERuDeF has been working very closely with communities to raise nurseries for these critically endangered species at the community nurseries of Bova I, Bakingili, Bomana and Bafia, the bone of contention is what becomes the fate of the relics of these threatened species if propagated? If they would be cut down randomly again given that even the trees which are supposedly within protected areas are cut down with no fear. Many are those who think more education needs to be done and the Cameroon government needs to punish those involved in the illegal trade.

The role of community rangers as citizen Scientists in Research and Conservation of Gorillas and Chimpanzees in the Lebialem highlands, Cameroon

Ebong Lionel and Shuimo Trust The use of robust ecological data to make evidence-based management decisions for highly threatened species is often limited by data availability, and local ecological knowledge (LEK). The participation of communities living in high...

By Ebong Lionel. Edited by Shuimo Trust The Cross River gorilla (Gorilla gorilla diehli) is the northern and western-most gorilla subspecies and is restricted to the hilly rain-forest region along the Nigeria-Cameroon border, which forms the headwaters of the...