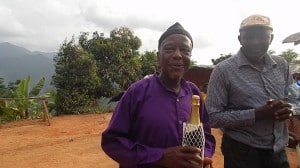 When the four wheeled pick-up vehicle belonging to the Environment and Rural Development Foundation (ERuDeF) made its way into the Njoagwi palace Fon’s palace, it was a huge celebration from the excited population, who have never seen a vehicle driven successfully into their community.

It was March 27, 2017, the day ERuDeF had ear-marked for village sensitisation meeting in Njoagwi for the creation of the proposed Mak-Betchou Wildlife Sanctuary. The villagers waited anxiously for their August visitors, but didn’t think even for a second that a car will accompany the visitors into the palace.

The road leading to Njoagwi Fondom from Abebue village in Essoh-Attah is in a pretty bad shape. The winding track meandering between slopes and rivers amid the slippery nature, makes driving very difficult, if not, impossible for vehicles to accelerate atop the fondom. Motorcyclists who even managed to reach the top, go through thick and thin before reaching their destination.

Through the driving expertise of ERuDeF senior chauffeur, Hine Kome, the team arrived Njoagwi community with the vehicle to the amazement of the entire villagers. Speaking on behalf of the Fondom, Fon, HRM Fotabong VL, said ERuDeF’s successful drive into the palace of Njoagwi, first of its kind, is a great joy to the community. He narrated several attempts vehicles have made at reaching the palace to no avail.

“We have had trucks, four wheeled cars and even motorbikes attempt to reach this palace but get stuck on the way. We are not happy that vehicles do not succeed to reach, but with your arrival here, we have renewed hopes that more cars will follow suite,” Chief Fotabong VL added.

In show of happiness, the Fon handed a bottle of champagne to the ERuDeF team for opening the ‘doors’ of the road for more vehicles to ascend.

The villagers were even more blissful to the arrival of the first ever car into their palace. Many surrounded the pic-up truck wanting to take a glance of the vehicle that braved the odds and succeeded in ascending into their community.

Quizzed on how he succeeded to mount pressure on the vehicle so it can climb up the palace of Njoagwi, Mr Hine Zico said he is familiar with hash terrain given his experienced got from similar roads in Kupe Muanenguba. He also said he motivated by the determination to transport all his personnel to their final destination, with no one dropping out. The 9 years old experienced driver, with humility, encouraged the Njoagwi youths to get into the steering and practice driving so they can all be transporting their fellow villagers into their countryside.

Njoagwi village, host to some 1,500 people, is situated at the slopes of the proposed Mak-Betchou Wildlife Sanctuary, Lebialem Division Southwest Cameroon. It is boarded to Abebue, Essoh-Attah in the North, Shancho, Dschang in the East, Andu, Lebang in West, and Mbetta, Nguti in the South. 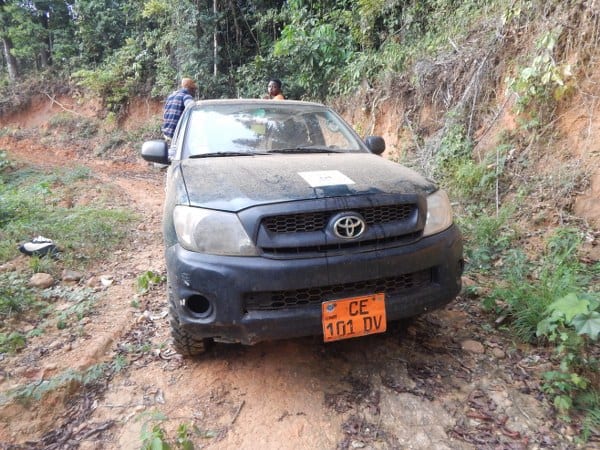