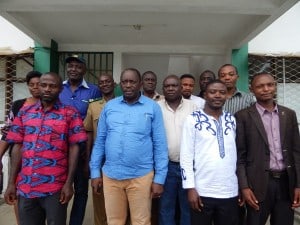 A technical committee for the elaboration and validation of a Management Plan for the Tofala Hill Wildlife Sanctuary will soon be put in place by the Ministry of Forestry and Wildlife (MINFOF). This follows a letter addressed to the minister by the conservator of the said Sanctuary, Mr Thomas Njimin Amin, requesting the committee be setup as soon as possible.

The conservator’s letter comes on the heels of a two days meeting bringing together officials of the Southwest Regional Delegation of Forestry and Wildlife, and the Environment and Rural Development Foundation (ERuDeF). The meeting which took place, Tuesday April 11 and Wednesday April 12, 2017, was aimed at validating wildlife, socioeconomic, and mapping survey reports in view of the elaboration of a management plan for Tofala Hill Wildlife Sanctuary.

Opening the meeting, Southwest Regional Delegate, Mr. Dipanda Issola Francois called on all stakeholders to put hands on deck so a concise management plan is carved out for the Tofala wildlife sanctuary. He pledged his total support and that of his collaborators in successfully ensuring that the plan is produced, and on time.

Participants were treated to tentative reports of the wildlife varieties, socioeconomic potentials, NTFPs, Maps, among others, found in and around the sanctuary. Following recommendations from participants, more research will be carried out to complete the already existing reports. To that effect, timelines were given to the different stakeholders responsible for the execution of the research.

It is hoped that by the end of May, all reports must have been completed and the technical committee formed. The committee will facilitate the processes leading to the development of the management plan.

The leading National NGO on conservation, the Environment and Rural Development Foundation (ERuDeF) is facilitating the entire exercise.