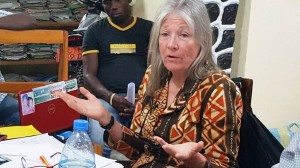 The Conservation Officer for Rainforest Trust, in charge of Africa and Madagascar, Sally Lahm (Ph.D.) has just wrapped up a 10-day visit to Cameroon restating her organisation’s commitment to continue assisting partner organisations in Cameroon and Africa handle challenges faced in executing conservation projects.

Two years after her organisation approved a three-year funding for the creation of Mak-Betchou Wildlife Sanctuary, Mt Muanenguba Herpetological Sanctuary and the development of a Management Plan for the Tofala Hill Wildlife Sanctuary, the newly appointed Conservation Officer for Africa and Madagascar, April 2018, was once again in Cameroon to see for herself what has been achieved so far.

Her first stop was at Cameroon’s leading conservation non-profit organisation, the Environment and Rural Development Foundation (ERuDeF)’s Head Office in Buea, where she was given status report of the creation of the Mak-Betchou wildlife sanctuary (now Proposed Bangwa-Mbo Wildlife Sanctuary) and the development of Management Plan for Tofala Hill Wildlife Sanctuary. Keenly following and asking questions for better understanding, Dr. Sally expressed satisfaction at the degree of honesty and pro-activeness of ERuDeF.

“It was very fruitful and honest. I know better and have a proper understanding of the challenges you have now in the project the alternative ways you are looking at,” she said.

The Rainforest Trust’s Africa & Madagascar boss commended ERuDeF on its sense of professionalism noting that it’s the only pre-condition to receive funding from her organisation.

“Rainforest does not fund any organisation unless we feel that they have the professional competence and experience because we do not have people on the field working with the organisations that we fund. We depend totally on you our partners to do projects as you describe them honouring the schedules in your work plans as well,” she expounded.

Dr Sally implored ERuDeF to already start thinking of a sustainability mechanism for the projects. “The project does not end at the end of the project. After creating the Proposed Mak-Betchou Wildlife Sanctuary and community forests, it is important that ERuDeF still be there to work on sensitization, community supports etc without which communities will lose interest in conservation. You have still a lot ahead of you after community forests creation and the sanctuary,” she noted.

On his part, ERuDeF’s President/CEO, Louis Nkembi, thanked Sally for taking take off to come see what his organisation is doing on the ground. He promised meeting all deadlines and effectively implementing all aspects of the projects as scheduled, despite the ongoing Anglophone Crisis.

From Buea, Sally headed to the Divisional Delegation of Forestry and Wildlife, Moungo, Littoral Region to examine level of progress in the creation of Mt Muanenguba Herpetological Sanctuary. Welcoming the team, made up of the Rainforest Conservation Officer, Dr Sally Lahm, the President and Chief Executive Officer of ERuDeF, Louis Nkembi, CAMHERP-CBF representative, Miss Takwi, as well as the coordinators of the project, the Divisional Delegate, NLEGUE Etienne Hyacinthe, said the project has been evolving progressively towards the right direction.

Explaining the legal framework that will eventually see-through to the gazettement of a protected area in Cameroon, the Delegate said the proposed Mt Manengouba Herpetological Sanctuary is on the right footing and will soon be gazetted.

“MINFOF team has to go to the field to confirm results presented in the Technical Note before submission to the Ministry of Forestry and Wildlife. From there, the Ministry shall sign the Public Notice, which marks another milestone in achieving the project goal. On this, I will appeal to the two facilitating NGOs; ERuDeF, and Cameroon Herpetology-Conservation Biology Foundation (CAMHERP-CBF), to always involve the MINFOF team, in every process of the execution of the project. In that way, we shall facilitate the entire process,’’ NLEGUE Etienne Hyacinthe added.

Dr Sally Lahm, appreciated the efforts the government has been putting so far. She encouraged the Delegation of Forestry and Wildlife, to redouble its efforts, so that all delays experienced in the past, could be minimised.

Having understood the level of progress as presented by the MINFOF Divisional Delegate, the Rainforest Trust Conservation Officer met with the implementing organisations; ERuDeF and CAMHERP-CBF to evaluate their achievements and challenges faced in the creation process. After presentations from the project coordinators, Fai Elvis from CAMHERP-CBF, and Stanley Acham from ERuDeF, Dr Sally Lahm expressed her concern on the low execution rate of the project activities and urged the team to redouble their efforts and ensure that the proposed new deadline of activities should be respected.

The Conservation Officer also paid curtsey visits to Nsoung and Mouamenam, communities adjacent to the proposed protected area. In Nsoung, the local population expressed satisfaction in the project execution. They pledged their support to the project as it promises to induce development in their village. Meanwhile, the entire community of Mouamenam demanded for transparency and the right approach in execution of the Mt Manengouba project.

With a better mastery of the achievements and challenges faced by the different projects, Dr Sally Lahm, extolled ERuDeF, and CAMHERP-CBF for the progress made so far in the classification of the proposed Mt Manengouba Herpetological Sanctuary. She equally made some pertinent remarks, recommendations, and follow-up mechanisms, that will be strictly implemented to facilitate the process.

The Rainforest Trust’s boss for Africa and Madagascar noted that no further projects will come to her partner organisation unless the current projects are completely executed. She however, prayed that the Anglophone crisis ends soon, so execution of projects within the Anglophone Regions in Cameroon can be speedier.

From Littoral Region, she headed to the Centre Region for another evaluation visit to Wildlife Conservation Society-Cameroon, where she rounded off her visit to Cameroon.

Rainforest Trust-USA is one of the world’s leaders in the protection of tropical ecosystems and wildlife.