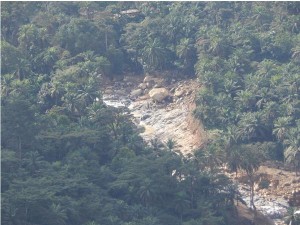 In the month of August 2017, a devastating landslide occurred around the proposed Mak-Betchou Wildlife Sanctuary, Lebialem Division, Southwest Cameroon. Four (Essoh-Attah, Fotabong III, Etabang and Elumba-Mbo) out of the five villages that constitute the Mak-Betchou area suffered heavy material and financial losses.

Unfortunately, the heavy loss recorded on flora and fauna around the proposed sanctuary, cannot be over emphasised. From heavy cocoa plantations, to loss of canopy trees, rodents, and some carnivores, the heavy mudslide that hit the area, had untold damages to biodiversity conservation.

“The day landslide occurred, we saw how many big trees like White wood, Mahogany, palm trees, cocoa farms and animals like rat mole, Mongoose, cane rats, and many others, were being brushed away in the entire area where Mak river passes,’’ Says Ebe Bernard, a local Oil Mill Operator in Essoh Attah.

Another inhabitant Njingo James, added that all the cocoa trees and other fruits trees closer to the Mak river bank, were carried away. He stated that at least five years would be required for the vegetation cover to regain its natural status like before. Many community members testified that they have seen dead animals and reptiles lying in neighbouring forests were the flooding occurred. 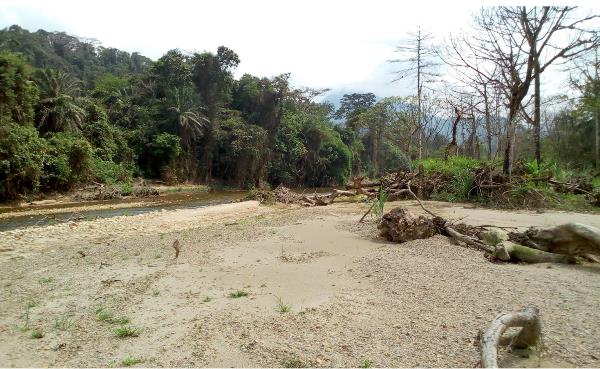 [/one_half]The river bank that could not been seen from far distance, is now open to clear view. People have created new roads were nobody could pass under normal circumstances.

If care is not taken to prevent landslide and flooding in the locality in the years ahead, human population as well as the biodiversity are going to continuously suffer the consequence of environmental hazards.

In order to prevent landslide and floods, there is a need to avoid farming, settling and excavating rocks on steep slopes. Deep rooted trees should also be planted to hold the soil from moving, while dumping waste in streams and water ways should be avoided. Embankments should equally be raised to avoid overflowing of streams; adequate drainage done to channel run-off properly, meanwhile community members need to be sensitized and educated on land slide/floods management.

The Proposed Mak-Betchou Wildlife Sanctuary, located in the south of Lebialem Division forms part of the Lebialem highlands forest, in the north-eastern part of South West Region. It is about 10 km west of Menji the Divisional headquarter of Lebialem Division. It is the most refuge area of the African elephants (Loxodonta africana cyclotis), Chimpanzees, Birds, fishes as well as plants species.