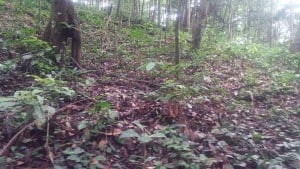 [/one_third]The population of Bokwa, Kendem and Fumbe villages in the Upper Bayang Subdivision Southwest Cameroon have cautioned their chiefs to desist from excessive sale of community and forested lands inducing wanton deforestation in the area.

They were speaking recently, during sensitisation meetings organised by the Environment and Rural Development Foundation (ERuDeF) for the creation of community forests that will serve as a corridor linking Mone Forest Reserve in Upper Bayang and Tofala Hill Wildlife Sanctuary in Lebialem passing through Forest Management Unit (FMU) 11-002.

According to villagers, the community/forested lands are mostly sold to wealthy individuals from the West, Northwest and other parts of Southwest, who have destroyed the forests for cash crop cultivation.

“Our chiefs have resorted to recklessly selling large hectares of our community lands to these non-natives. An individual buys upto 10, 50, 100, 500 and even 800 hectares of forestland from our chiefs just at an instance. The lands are used to setup palm, cocoa and rubber plantations. Besides inducing deforestation, this act is detrimental to us the indigenes and if care is to taken, we shall soon be buying lands from these people,”Ako Jonathan, an indigene of Bokwa village cried out.

Corroborating this, the Coordinator of the Tofala-Mone East Corridor Rainforest Community project, Assongacap Asonga, after a feasibility study carried out recently to ascertain the possibility of creating a Community Forest (CF) block between the proposed BEET CF and Forest Management Unit 11-002 in Upper Bayang, observed that non-natives legally owned most of the large palm, cocoa and plantain plantations. A situation, which according to Mr. Asong, has compounded the rate of deforestation in the area as supposed buyers open new farmlands.

“In the process of opening farmlands, those who buy these lands cut down trees, hence, destroying the habitats of some animals. Most of the crops planted in the plantationare still young, ranging from one to five years.We call on the competent authorities to take concrete measures to remedy these problems for it could create serious issues in the nearest future,” Floribert Asonga cautioned.

The scramble for land in this area has been largely attributed to ongoing projects to complete the ring road.

“One of the causes of this problem is the Bamenda-Ekok road which has rendered the area very accessible. I call on our chiefs especially those of Etoko, Kendem, Numba, Egbemo, and Nchemba villages who are along the Bamenda-Mamfe road to reduce the rate at which they sell our community land to strangers as it represents a threat to our future generations to come,” says Tabe Valentine of Etoko village.

Upper Bayang is lodged in the heart of a dense tropical rainforest rich in biodiversity. It has attracted forest exploitation interests, ecotourism and Non-Timber Forest Products (NTFPs)harvesters in the past years.The biophysical environment today comprises of forest cover, which is highly facing timber exploitation, agricultural areas and human habitation.Upper Bayang is blessed with a long raining season and a short dry season. This makes the area rich of water resources in the form of streams, rivers and springs.

The Environment and Rural Development Foundation (ERuDeF) is piloting the Tofala-Mone East Corridor Rainforest Community Conservation Project that began in January 2016. The project seeks to create a wildlife corridor, which will serve as a genetic pool linking the Tofala Hill Wildlife Sanctuary (THWS) and the Mone Forest Reserve. In particular, it will connect the Cross River gorillas of TofalaHill Wildlife Sanctuary to those of the Takamanda National Park through the Mone Forest Reserve.