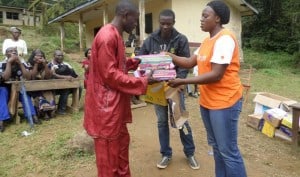 During the donation ceremony which took place at the premises of GS Bechati, ERuDeF’s Manager for Education, Akeh Nug told the teachers, students and parents present to use the books judiciously and help improve on the education of the kids “We are giving these text books today because we are aware of the challenges that schools in areas considered as surburbs face difficulties in preparing notes for the students. We equally want these young people to grow up tomorrow and get descent jobs rather than always resorting to the forest as farmers, trappers or hunters”. Ms Akeh lauded the efforts of the schools that have taken lessons on environment seriously and used the opportunity to officially announce to them that Tofala Hill Wildlife Sanctuary had become fully protected following the Prime Ministerial decree in September.

Reacting to the donations, the Head Teacher of GS Bechati thanked ERuDeF and her partners for equipping their libraries and said the books will go a long way in improving the standard of education in his school “We are so glad today because our library now has more books. More books in all the different subjects including Mathematics, Geography, English, etc only means many more students will benefit and this will help upgrade education and consequently environmental conservation”

He used the opportunity to pledge their full support behind the government of Cameroon, ERuDeF and partners in ensuring Tofala Hill Wildlife Sanctuary gets all the protection it needs.

The donation is part of ERuDeF’s Environmental Education Fund created to assist schools in forest adjacent communities with the ultimate goal to protect critically endangered animals such as the Cross river gorillas and others. Man and Nature has supported this initiative since from its inception.