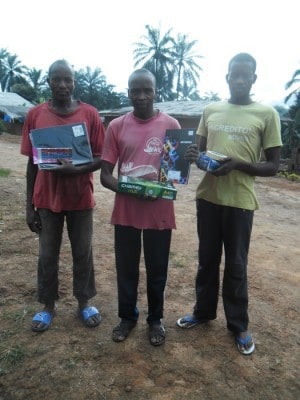 Some members of the Village Forest Management Committees(VFMC) in four communities bordering the just declared Tofala Hill Wildlife Sanctuary have received logistical support to permit them collect field data and be more informed to make scientific decisions about the biological population in the forest. The donations were made in a workshop that took place recently.

The VFMCs in, Nkong, Besali, Bechati and Folepireceived books, pens, papers, files, rulers, pencils; amongst others to ease research and data collection, as well as record keeping.

These donations are a follow up to earlier support given to the community based forest governance structures a few weeks back. They were equally trained on data collection and management, use of GPS amongst others in the workshop. Among the participants were the presidents, secretaries and public relations officers of the VFMCs for the Tofala Wildlife Sanctuary.

It would be recalled that the VFMC, according to Cameroon’s 1994 Forestry and Wildlife law, is a community forest governance structure formed and strengthened by the Ministry of Forestry and Wildlife. This body acts as an auxiliary unit to the forestry administration. They form the entry point of forest and forestry related operations at the community level and are supervised closely by the Ministry.