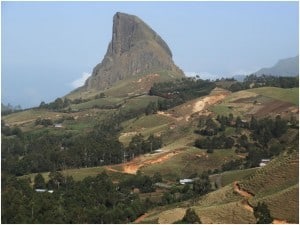 Access to potable water is one of the biggest challenges rural communities in Cameroon face. Magha-Bamumbu in the Lebialem Division has a long history of water shortages which has often landed inhabitants into serious water related diseases. Water resources in catchment areas in Bamumbu is fast becoming a rare commodity especially in the dry season when supplies dry off and the need for water not only for household purposes but for irrigation and rearing of cattle increases. This sometimes leads to conflict among communities.

In a bid to redress the precarious water situation in this area, the Environment and Rural Development Foundation (ERuDeF) recently produced a water catchment map of the Magha-Bamumbu area to identify the main water catchments which can be revamped to benefit the different communities.

The restoration process under the Echinops project intends to restore and protect this natural resource by reforestation of the water catchment areas. The process began with the mapping of water points or catchment areas by a Cartographer from ERuDeF.

On August 25, 2014, the Magha-Bamumbu community was brought together for a restitution workshop on the progress of the water catchment protection project. This workshop brought together a total of 34 participants amongst which were the representatives of the Mayor of Wabane, the Fon of Bamumbu, the Chief Forestry Officer for Bamumbu and members of the Mt Bamboutos Echinops Cooperative Society (MoBECoS)

The objective of the meeting was to inform local communities, local authorities and traditional rulers of Bamumbu and Magha-Bamumbu of the on-going water catchment project in Magha-Bamumbu, the restitution of the mapping of water catchment points, carried out by the cartographer and deciding on which catchments to be protected first.

At the end, 10 vital water catchments out of the 37 identified were chosen by the community with the help of the ERuDeF team and work will soon commence on these sites.

Both the local authorities and community members were impressed with the turn of events and the fact that they were the key actors at every stage of the project.

ERuDeF is the first local organization in Cameroon to implement the Nagoya Protocol on Access Benefit and Sharing (ABS) with its Echinops giganteus project in the Mount Bamboutos area.