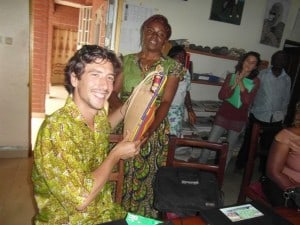 Staff of the Cameroon Program for US charity Trees for the Future and the Environment & Rural Development Foundation (ERuDeF) have said farewell to US Peace Corps Matthew Piscopo. The send off ceremony took place on Wednesday January 8, 2014 in Buea. Matthew Piscopo’s stay in Cameroon was supposed to end in March 2014, but his departure became a bit sudden given that he had a pertinent family issue back in the United States.

Matthew came to Trees for the Future Cameroon also known as TREES Cameroon in January 2013. According to his contract, he was to spend the next one year with the organization. He however decided to extend his stay for three months to handle some unfinished work. On his arrival, Matthew was assigned to promote agroforestry and sustainable farming amongst rural populations. He coordinated agroforestry activities in Fako Division, SW Cameroon. He identified and introduced agroforestry technology of farming to three new farming groups in Mile 16 Bolifamba, Soppo Likoko and Batoke and equally worked with the old farming groups around Fako. He liaised with schools such as the Borstal Youth Correctional Facility where he trained teachers and students on the different agroforestry practices, focusing on alley cropping and live fencing. Matthew Piscopo before his departure worked with 6 communities and distributed 10.5kg of seeds to these communities. He established over seven nurseries with farmers and schools and a total of 270182 trees were transplanted. Matthew also organized 17 workshops and trained 35 people. He had a good relationship with the people he worked with and some Farmers in Mile 16 have testified they will miss him “He was so jovial. He taught us how to set up our tree nurseries and helped us to transplant them. We have learnt a lot from him and we will miss him” A Farmer said.

Apart from working with farmers and schools to consolidate the agroforestry system, Matthew was equally very resourceful in different services of the organization. He worked closely with the communication team to beef up their capacity in online communication. He equally assisted in training some staff on the Geographical Information System (GIS).

Speaking during his send off gathering in Buea, Matthew extended his heart felt gratitude to the entire TREES Cameroon team for their constant collaboration and tolerance. “I learned a lot from each and every one of us and I will carry these memories all my life”. He thanked the entire staff for their hospitality.

Speaking on behalf of the Country Director of TREES Cameroon, the Director of Administration and Human Resource Ita Nawom extended words of gratitude. “We would never forget you. I am sure each and every one of us here has learned something from you. You were a smart and energetic man who always likes to share knowledge at any giving time. Thank you very much”.

The Director of Budget and Finance, Ursela Nkeng equally thanked Matthew for his collaboration and support. She handed him a gift on behalf of ERuDeF and TREES Cameroon. Matthew was very happy with the gift.