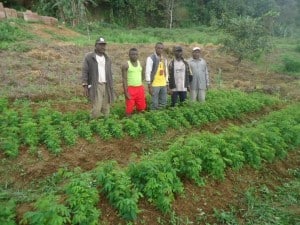 Ndungated village in Lebialem Division of Southwest Cameroon, has been rated the best in nursery management among the three villages selected for nursery establishment in Lebialem.

The assessment was made recently by a team of agroforestry technicians from the Environment and Rural Development Foundation (ERuDeF).

After examining the level of germination of the nurseries in Alou, Meka and Ndungated, these technicians noted that seedlings in nurseries in Ndungated village recorded the highest surviving rate.

According to the team, amid the training given to all interested villages on how to manage and take proper care of their bare root nursery in Lebialem, Ndungated village implemented most of what they learned with majority of their seedlings in the nurseries surviving.

To the group leader of Ndungated village, Chief Stephen Nkemanda, the group showed more interest and commitment than ever before.

“My group members were very committed. On the first week when we nursed the seeds, rain was not falling. So we designated some group members to water the seeds regularly. We also had other people weeding around the nursery. All of that coupled with continuous monitoring, enabled most of our seeds to germinate,” Chief Nkemanda said.

For his part, the head of agroforestry technicians from ERuDeF, Elong Smith, appreciated the commitment and determination the Ndungated group has shown.

He urged the group to continue the follow-up of their nurseries so when the time of transplant comes, they will have enough seedlings. He promised to carry the great news of huge germination success to hierarchy for a possible award to be given the Ndungated village.

In-line with using agroforestry technologies to restore degraded landscape while ensuring environmental protection and improving the income of resourced-poor farmers in Cameroon, the Department of Agroforestry and Agricultural Development at ERuDeF in collaboration with Trees for the Future, established agroforestry nurseries with farming groups in Lebialem Division. Seeds of Tree species like Acacia, Leucaena and prunus africana were handed to interested farmers in the month of March 2017. Before the establishment of these nurseries, these farmers were educated on the importance of these agroforestry tree species.