Performance Based System Instituted at ERuDeF 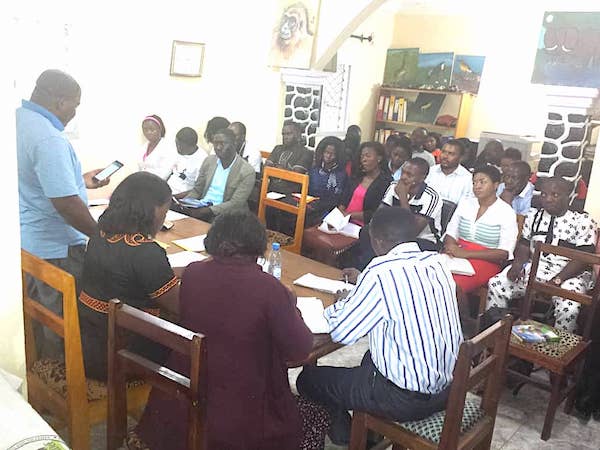 The management of the Environment and Rural Development Foundation (ERuDeF) has put in place a new system geared towards improving the Organisation’s over all productivity, known as the Performance Based System. This system was introduced to the staff of the organisation during an extra-ordinary staff meeting, which took place at the Organisation’s head office in Buea, June 25, 2018.

Aimed at ensuring that ERuDeF and partners’ targets are realised in a timely fashion, ERuDeF’s President/CEO, Louis Nkembi, said the system is the best way to realise the organisation’s vision and meet partners’ deadlines. He gave a vivid explanation on how this system will operate; “By this system, staff will be paid based on the realization of partners’ projects, departments and organizational monthly targets. Each director  will submit both organisational and partners’ monthly targets, and monthly budget by the 30th of the previous month. Performance indicators will be created and monitored per timeline; no partial execution will be accepted,” the ERuDeF boss expounded. Quizzed on a possible clash between ERuDeF and partners’ targets, Louis said any clash of targets should be communicated ahead of time for necessary adjustments, with partners’ target being a priority.

To be successful in this new system, Mr. Nkembi implored Staff to master, own, delegate, monitor and report projects, and to assess impact timely within their different projects, programmes and departments. He underscored the need for staff to read extensively and be abreast with changing trends within their field of specialisation and beyond.

This new system, was greeted variedly by different staff. To the Director of Wildlife and Protected Area, Samuel Ngueping, the system will fill some managerial lapses within the organization. “For some time, there have been some lapses as far as the management of the organization is concerned. It is time for each of us to take our responsibilities and follow up each target so we can improve on project implementations,” he added.

According to ERuDeF’s Dryad Programme Manager,  Sharon Enda, the system will induce some reawakening in the organization.  “It’s going to put staff on guard because when you are aware that you will be paid based on your results, you will take the job seriously, plan accordingly, and make sure that the targets you have for a particular period is met since your salary is based on that. You know that if you perform less, you will be paid less and if you perform well, you will be paid well,” she explained.

The Director of the Department Forestry at ERuDeF, Deh Nji Herman, on his part, said it’s a welcome system. He however, recommended that management put in place an enabling environment for the success of the system.  “It’s a welcome system but there are a lot that need to be put in place if the system must succeed. For example, we sometimes have obstacles that hinder us from meeting targets. Sometimes you produce targets for the day and other things will pop up from other offices and you have to implement it at the detriment of your targets, but I think if everybody, including top management observes this system, it will bring a lot of changes,” he noted.

It was however resolved that, staff who perform p well (meet all their targets) will be offered monthly letters of appreciation and travel allowance, while those who perform poorly, will be shamed. The Performance Based System goes operational from July 1, 2018.