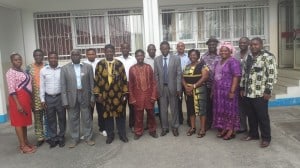 The chiefs and elites of Nkongho-Mbo have resolved to transmit a letter to the Minister of Forestry and Wildlife, in the months ahead, expressing their desire for the creation of a protected area in their clan.

This resolution was arrived at, January 13, 2017, at the end of the Nkongho-Mbo Review and Planning Meeting towards the Creation of the Proposed Mak-Bechou Wildlife Sanctuary, after a unanimous decision by the chiefs and elites to support the creation of a protected area in Nkongho-Mbo.

Speaking on behalf of the Chiefs, the traditional ruler of Jungo village, His Royal Majesty Fonjungo, said the creation of this protected area will help in the conservation of their “God-given resources and the sustainable development of the area.” The representative of the elites, Justice Fonjock Ekenya corroborated the Chief adding that the creation of the protected area will as well aid in the conservation and sustainable management of medicinal plant and the development of Nkongho-Mbo’s touristic potentials.

The chiefs and elites promised to stand firm together to support the development and implementation of conservation programmes in their clan with the mentorship of the Environment and Rural Development Foundation (ERuDeF). Both chiefs and elites resolved to meet with the Minister of Forestry and Wildlife in April, 2016 to declare their desire for the creation of a protected area in their clan.

ERuDeF’s President/ CEO Louis Nkembi, commended the commitment of the chiefs and elites of Nkongho-Mbo reiterating the indispensability of nature to man. “We need nature to survive but nature does not need us to survive” Mr. Nkembi said pledging his organisation’s support in training and capacity building for sustainable development in the Nkongho-Mbo Area.

In order to ensure the proper spelling and adequate representation of adjacent villages in the map, it was resolved that ERuDeF completes the mapping of the area and updates the existing map with the aid of the administrative map of the area by March 30, 2017.

Regarding the visibility of the activities of the people of Nkongho-Mbo, it was resolved at the end of the meeting that ERuDeF will support the development of a website for the Nkongho-Mbo clan while the elites ensure content development and management of the site.

To limit differences that usually exists amongst adjacent communities to protected area, ERuDeF and the representatives of the chiefs and elites, agreed to meet with the Fons of Mbetta, Lekwe and Dinte villages to resolve issues patterning to community engagement and the sustainable development of projects in the area.

According to the resolutions, sustainable development, was amongst others, going to be realised through the creation of the Nkongho-Mbo Farmers, and Women cooperatives. Meanwhile, it was resolved that the protected area in question, was going to be known as the Proposed Mak-Mikiih Wildlife Sanctuary. The meeting was organised by ERuDeF.