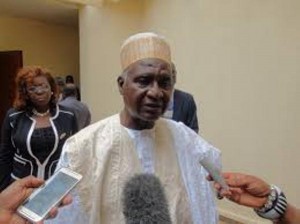 [/one_third]Cameroon’s Minister of State, Minister of Tourism and Leisure, Bello Bouba Maigari has congratulated the ERuDeF Media Group on her efforts in valorising the Country’s eco-touristic potentials.

In a letter acknowledging receipt of some three publications (ERuDeF Impact Magazine, The Green Vision Newspaper and The Cameroon Biodiversity Newsletter) of the Media Group dated December 13, 2017, the Minister praised the Group for giving exposure to Cameroon’s biodiversity hotspots.

“We want to use this medium to encourage and congratulate you and your collaborators on the immense role and contribution you are making to zoom on biodiversity hotspots around the country, thereby affording readers the opportunity to live the realities of the country’s rich ecological landscape,” the letter read in parts.

The Minister urged the ERuDeF Media group to valorise tourism through tourism and leisure.

“We further encourage you to introduce in ERuDeF, a component that shall undertake the non-consumptive valorisation of protected areas through tourism and leisure,” he implored.

ERuDeF Media Group is a subsidiary of Cameroon’s leading conservation non-profit organisation, the Environment and Rural Development Foundation (ERuDeF) launched in 2013 in Buea, Southwest Cameroon to support the growth of the independent media in Cameroon. It establishment was induced by ERuDeF’s strive for an independent media landscape for better coverage of socio-political, environmental and corporate issues void of bias, sensationalism and shallowness, the Organisation decided to establish a non-political, non-sectarian and non-profit oriented media group known as the ERuDeF Media Group.

It’s an apolitical structure registered under the voluntary social welfare agencies ordinance of 1961. Under the leadership of Louis Nkembi (the Publisher), the ERuDeF Media Group is building the most robust landscape for environmental and civil society journalism in Cameroon, independent of the government. Some signature projects include; The Green Vision Newspaper reporting on environmental conservation and governance in Cameroon since 2013; the ERuDeF Impact Magazine now the African Conservation Impact Magazine reporting on impacts of conservation African civil societies since 2016, and the Cameroon Biodiversity Business Newsletter established since 2016. The group also runs the ERuDeF Centre of Environmental Film Making and a Non-profit Journal to support communication and capacity development of Civil Society Organisations in Africa.