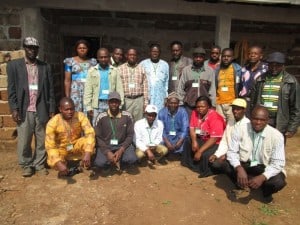 The people of Magha-Bamumbu have promised to support the Access and Benefit Sharing, ABS, project in 2015. The project that commenced in 2012 is now at its commercialization phase. They made this pledge on January 28, 2015 during a workshop that took place at the Mount Bamboutos Echinops Cooperative hall. The workshop organized by ERuDeF’s ABS team was aimed at schooling the people on the benefits of the echinops project as well as exposing the 2015 action plan.

Community involvement and integration in project activities is very fundamental to the success of any project. It is within this framework that the ABS team found it necessary to remind the people of Magha-Bamumbu on what they stand to gain from the echinops project.

Participants at the workshop discussed key issues like the quantity of echinops to be harvested as well as the price per kilogram.

Members of the Mount Bamboutos Echinops Cooperative (MoBECos) suggested 2.500 francs cfa for a kilogram of dried echinops roots but the ABS Coordinator, Lea Nkenmene, said the suggested price was too high especially because non-monetary benefits are still to be considered. Afterwards, it was resolved that the price per kilogram of echinops would stand at 2.000 cfa while waiting for government to decide the final price.

The plant’s sustainability was another area of interest to both the project coordinators and the community. After a long exchange on the issue, members of the community promised to follow the standard for planting echinops seeds suggested by ethno-botanists in order to guarantee the sustainability of the plant.

Nkenmene reminded them that fines have been allocated for cooperative members who do not respect the planting norms. This is expected to spur members to be meticulous when planting the echinops seeds.

“The echinops project is in sheer competition with the cultivation of Irish potatoes within the Magha-Bamumbu community, consequently members should own this project and make it vibrant to attract the population,” said Fabious Menkemantoh Leku, member of MoBECos in charge of production, harvest and supply of echinops giganteus.

According to the ethno-botanist, creating a forest will go a long way to reduce the acute water shortages which have recently ignited conflicts among farmers as they scramble to irrigate their farms during the dry season.

“The forest belongs to the community and not to an individual,” Ndam said.

The participants at the workshop expressed the desire to actively participate in the tree planting exercise on the different water catchment points. They also expressed great need for the creation of a micro-credit scheme in the village, saying it would encourage farmers to save and plan for the future and those of their children.