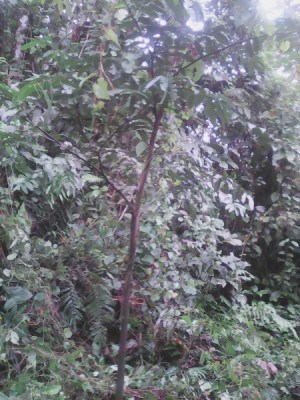 Inhabitants of the Mount Cameroon Borders and its peripheral communities say the agro-industrial company, Cameroon Development Corporation (CDC) has stopped parading the areas planted with threatened trees in the Bakingili Community Forest. This is thanks to the sapling stages attained by trees planted by the Environment and Rural Development Foundation (ERuDeF) in 2014/2015 to restore the critically threatened trees of the area.

This observation was made during an evaluation exercise carried out by the Community Forest Assistants of Woteva and Bakingili and a team of experts from ERuDeF in August 2016. The aim was to assess growth stages of seedlings which were planted in the 2 community forests between 2014 and 2015. The trees included African Zebrawood (Microberlinia bisulcata), Mahogany (Entandrophragma angolensis), Country onion (Afrostyraxlepidophyllus) Drypetes staudttii, (Iroko) (Milicea excels), Azobe (Lophira alata), Pygeum (Prunus africana) and Drummar stick (Cordia platithystera).

During the evaluation exercise, it was realized that trees were already at sapling stages. The growth stage had stopped encroachment by CDC. Because of the situation, the Community Forest Assistant, Genesis Shifuh, appreciated ERuDeF’s efforts in making their dream come true.

“No doubt CDC does not longer invade this part of the Community Forest. Even when trees were just planted in the forest, the Company was still invading with their oil palms. Now the trees have attained sapling stages and trespassing into this particular part has completely stopped” he gladly expressed.

He explained that before the coming of ERuDeF to their community, the Community Forest Management team used to have futile battles with CDC for several years on land recovery.

“I now see that we couldn’t succeed because our forest was still empty. Before ERuDeF came in with her efforts in 2014, no tangible solution was observed. Now, they (CDC) have completely stopped encroachment to this area because most of the planted seedlings are already at sapling/visible stages”, the Community Forest Assistant said.

Mr. Genesis Shifuh however opined that more still have to be done to completely stop further encroachment. He called on ERuDeF to support their efforts by extending the tree planting exercise to the other parts of the forest.

“We are raising a nursery of threatened trees to complete tree planting in the other half of the forest. If this is not done in the nearest future, the community risks losing that part of the forest. This is because, out of the 907hac of the Bakingili Community Forest land, only about 20% has been planted with trees and the remaining 80% is gradually being taken by the Company to plant oil palm seedlings” he lamented.

Another member of the Bakingili Community Management team, Ngotto John, appealed to ERuDeF and her partner to renew the just ended project.

“We are doing a lot on our own to complete planting in this forest and continue with management efforts to the already planted trees but ERuDeF’s support is still very welcome” he said.

The Conservation of Threatened Trees of the Mt. Cameroon Area project was conceived in 2011 to ensure that threatened trees in the MCNP and the surrounding community forests are re-established through local institutions’ independent actions. In collaboration with MINFOF and the MCNP service, the project has succeeded in regenerating the MCNP and its peripheries with over 30000 of these trees.

The project is supported by the UK based partner Fauna and Flora International (FFI) and the Mohamed bin Zayed Species Conservation Fund of the United Arab Emirates.