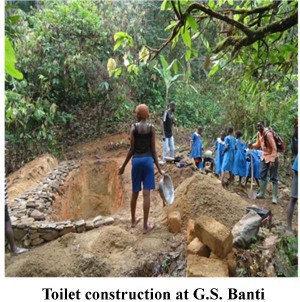 “This toilet construction project is a timely solution to the sanitary problem that had plagued the pupils of my school in the past years, who have resorted to using streams and surrounding bushes as toilets increasing the rate of malaria, typhoid and hepatitis amongst my pupils,” says Menkem Sylvester Zah, head teacher of G.S Banti.

Menkem Sylvester was speaking during the launching ceremony of a project for the construction of a five-chamber toilet at G.S. Banti carried out by ERuDeF in collaboration with her international partner, Man and Nature.

Welcoming the ERuDeF team to his community, the PTA Chairman of GS Banti, Godsey Mofor, lauded the initiative and enjoined the pupils to see the gesture as a blessing from God.

“There are over 25 schools in Wabane Subdivision and to be the selected as beneficiary of such a project is a rare privilege,” Mofor said.

The Fon of Banti, Fon Taliba, on his part, challenged the staff and students of Banti to make judicious use of the resource upon completion and to collaborate fully in ensuring its completion. 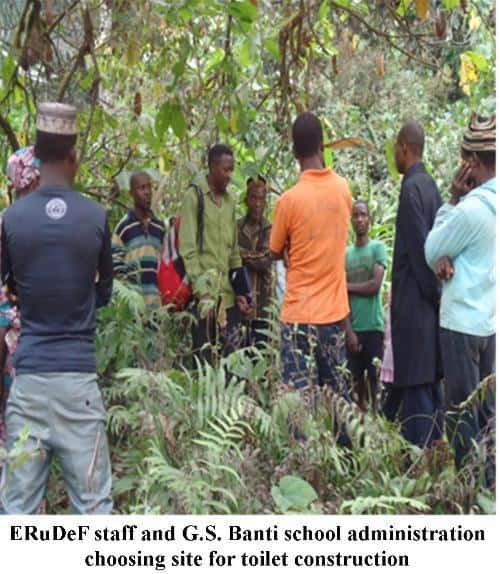 Fon Teliba promised 800 mud blocks for the construction of the toilet and wood for its roofing and doors.

Funded through the Net Positive Impact Project of Man & Nature, this project is part of the overall Conservation Development Agreement model requested by the Regional Delegate of Forestry and Wildlife for the Southwest to be put in place around the Tofala Hill Wildlife Sanctuary. premises of the Government school Banti Wabane Sub division, Lebialem division Cameroon. The launching ceremony was attended amongst others by Fon of Banti, Teliba Elias Kebang, pupils and staff of GS Banti, the PTA Chairman and a cross-section of parents and other members of the Banti community.